When The Legend of Spyro: A New Beginning was released in 206, Spyro fans and non-fans realized the importance of the game and its significance and with that in mind, Rice Puppet has done an awesome paintjob on an Xbox controller to resemble the Spyro. 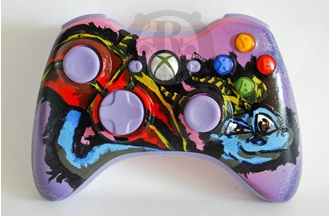 The paintjob comes with detailed character drawing on the front and a pink and almost fleshy backside of the controller. The paintjob is dominated by bright colours like pink, blue, sky blue, red and indigo. 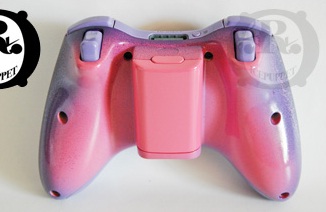 It looks very attractive and if you are a fan of the Spyro game, you really must go and contact Rice Puppet and ask for a customization of your console. He offers complete paint customizations of your consoles, controllers and gadgets and most of them until now have been done on Xbox controller and consoles. He claims to customize without voiding the famous Microsoft warranty. It should be reminded though, that any customizations and alterations on Xbox 360 is Not Liked by Microsoft and that voids your Warranty.

You would get your customized console within 7 to 10 days and you would have to check the prices on his official website. Coming back to the Xbox paintings, there was also this cool Kane and Lynch Custom Panted Xbox 360 which we featured sometime ago. Perhaps painting would not nullify your warranty as the artist suggests but who cares about it anyway for the modding and customization world out there is too exciting to be missed! 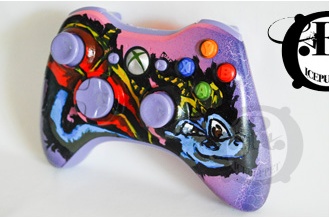