Are you one of those who really like to rap and keep saying Yo Bro!, what I actually meant was, do you like Hip Hop music?, if yes then this new xbox mod is the perfect thing to go with your gaming. 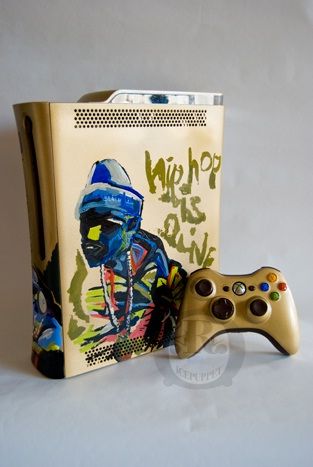 If you want your Hip Hop attitude to be portrayed on your gaming console as well then this new mod has been created just to fulfill your wish. This new Xbox mod is for those who do not want to let go of their love for rapping, something just for the lovers of the new music culture.

Created by Ricepuppet who also made the Hello Kitty Xbox 360 mod, the Spyro Xbox 360 Controller and the Domo Kun Xbox 360 Case mod, this specific creation made to portray the exact image of Hip Hop music, it has a golden colored background to replicate the bling effect and some really cool graphics that read “Hip Hop is mine” or something like that (I’m sorry but the font is not very much legible) and a Hip Hop artist who is in the traditional rapper outfit.

For someone who cannot find a way to blend in their music and gaming tastes this might be the perfect mod to suit their needs. Anyway since Hip Hop is not my kind of thing, the beauty of this new mod can only be appreciated by someone who is a true lover of the art form. But still it does look very Hip. 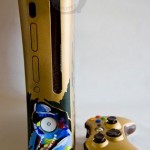 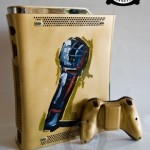 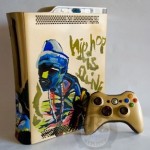