Marvel vs. Capcom 2 Available for Download on Xbox Live Arcade

Marvel vs. Capcom 2 had become almost a cultural phenomena and it was a shame that it was not available for download for Xbox 360 until today. It has just been unveiled on Xbox Live Arcade for download and the word seems to be getting around really quick. 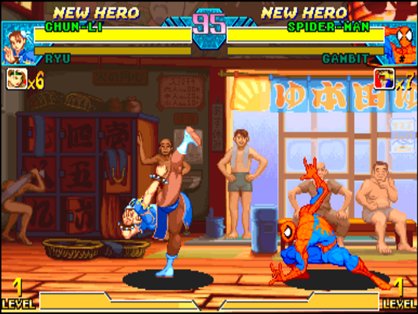 The game would be available for 1200 Microsoft points and the rival PS3 guys would get it for $15 in a couple of weeks. Lucky us! There isn’t much change in the gameplay though, except that it is available in HD and the enhanced graphic certainly look good on modern LCD displays.

There are 56 playable fighters and Marvel vs. Capcom 2 is certainly one of the best fighting games to be released and it is great that the game has finally arrived on the modern gaming platform. The little few enhancements done to the game do not really count for any major change in the gameplay as mentioned earlier but it might be a step in the right direction as there are many other kick ass games too, which can similarly brought to Xbox 360 from their old packages.

I had written about how the game has reached a cult status among the video gaming communities across the world sometime back. You could read about Marvel vs. Capcom 2 post we covered earlier to get a better idea. On the other hand, just visit Xbox Live Arcade and download it right away!