When Bungie developed Halo 3 exclusively for Xbox, they never would have guessed that it could titillate people’s olfactory and gustatory sensors. This cake here arouses the taste buds of everyone to such an extent that there could possibly be a deluge of drool while the game and the console sit dry and ignored in a corner. The Xbox Halo Cake comes with an authentic box shape and silver Halo 3 being printed on it. 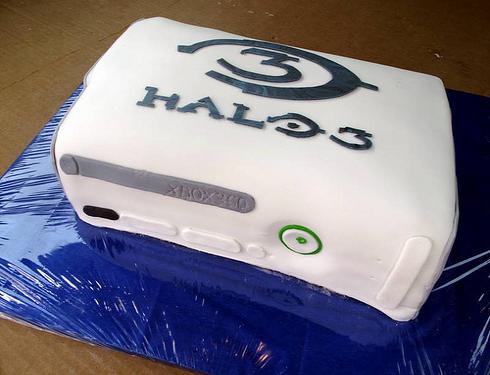 The buttons have also been replicated in such a way that you would only know it’s a cake thanks to all the yummy icing that covers the cake. I am not sure if the cake is up for sale and if you are trying to get it for yourself, you would have to contact SweetToothFairy who has not only featured this cake but also many others. Somehow, the idea of a first person shooter game being able to make a person drool is quite funny and amusing.

Baking cakes have never remained the same especially after the gaming industry took off. We see a number of cakes baked in honour of controllers, consoles and even video games. Xbox has had its share of cakes and sweets and one of them that we had earlier featured is the geeky Xbox 360 Cake. A combination of inactive life in front of the console and gobbling calorie ridden cakes is a sinful combination of sloth and gluttony.