We have had several options of the amazing Xbox 360 mods and it definitely makes it more interesting to have our own personalized mods. After some of our previous posts on Xboxfreedom talk about interesting stuff like Hello Kitty mod and Alligator skin mod for Xbox 360 mods, it is hard to imagine any other interesting ideas for Xbox mods. 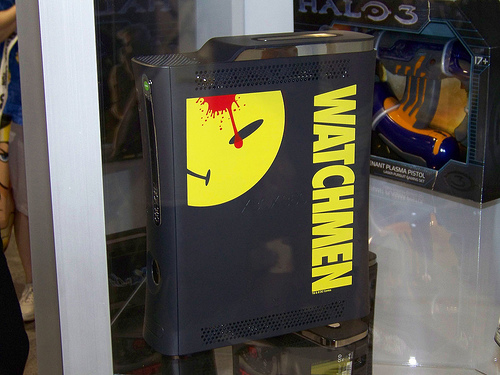 A more generalized themes for Xbox Mods, in this day and age would be to have movie-based Xbox Mods. With the launch of movies as the theme for Mods we should certainly have loads of funky Mods on the way,while, the movie – Watchmen, has already paved way in initiating the same.

A Watchmen movie Xbox 360 Mod which has been written about before, features the svelte, Silk Spectre II as cover. And now, the Watchmen Xbox 360 Casemod, is made to look classy, just like the movie was, a sci-fi, neo-noir classic. This Casemod has the Comedian’s stamp over it, the smiley symbol with a spot of blood on it, which makes it look super cool. It sure is a good start for a collection of Movie-themed mods.