Xbox Fans behold..the ultimate game room for the Xbox 360 game console is unveiled that is perfect for Geeks, Gamers and major lovers of this amazing console. 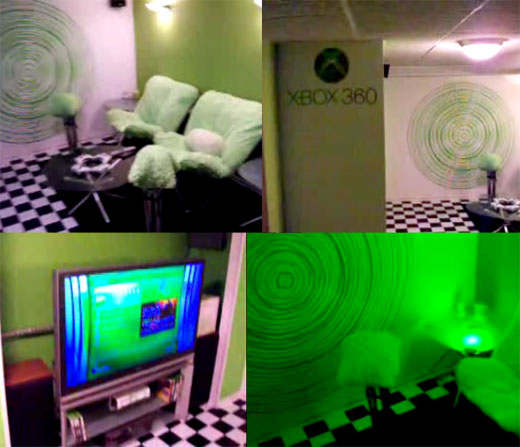 I wish I was able to create such a heaven of a game room for my gaming needs and escape. This particular Xbox 360 room is simply made for you to feel part of the community, part of the games, and part of the action. The entire setting is designed with the style of the Xbox 360 with its brand, logo and circles, green color of walls and seats, and also add on top of that a comfortable and able large screen for your needs.

Wow! What an Xbox 360 concept that someone has really created and put forth. I wonder if this guy is any good at playing games if they put such effort in creating a game room for his video game. The imagination just went crazy, just like the Xbox 360 Car Mod.