The Xbox 360 Gaming Tower is a perfect way to organize and keep all your Xbox 360 stuff organized and still remain looking cool and well designed. 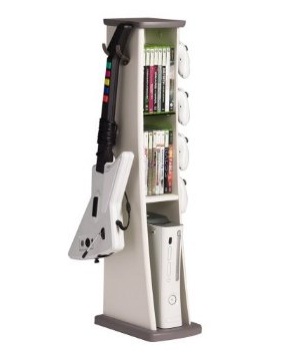 We all know how Xbox 360 gamers could get a little obsessed and start getting more Xbox games, more controllers for gaming tournaments and additional accessories to experience all the different games. The Thing is, all of these things take up a lot of space and instead of adding to the Xbox 360 experience and awesome design, it just makes a mess of the Xbox 360 room and also helps in getting games lost or scratched.

This cool looking Xbox 360 gaming tower is a seriously well designed organizer that looks cool and also is extremely practical. Besides the different shelves to stack your games, guides or movies on, there are also the side hooks which effectively hold up up to four Xbox 360 controllers and also hang the Guitar Hero controller for each of storage.

Best yet, this entire Xbox 360 tower is slim and could be used without taking up too much space and providing such utility. And for $99.99, it just seems like a smart and affordable solution. 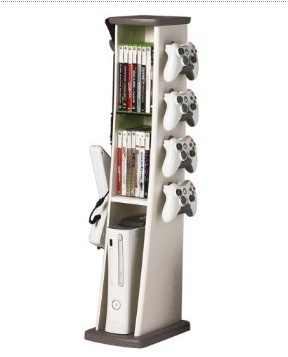