If you did not have enough of the spooky SAW movie series, then the SAW game is here to satisfy your hunger for more! Produced by Konami, this game  promises it’s players to send a chill down their spine, and scare them to their limits. 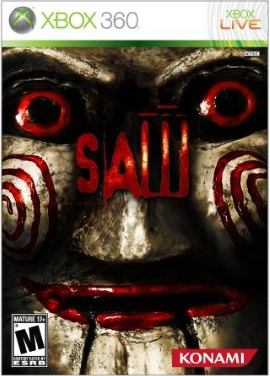 The special features of the game include Traps Of Lethal Cunning : Which in fact are a gauntlet of torturous traps for a handful of innocents, all laid down and managed by Jigsaw himself. The players need to think and act quickly before some innocent soul is killed in the most brutal way one could imagine. Revelations of all the unanswered questions from the movie series, discovering the origins of Jigsaw and finding out what happened to the characters from the first Saw movie, are also included in the game.

The game is much more psychological than you think, as the player is required to make many difficult decisions so as to protect the ones who can survive the ordeal, and the ones who can be left back. So get on your toes and start saving some innocent lives, as this official copy of the game sell for only $56.99.

STATUARY WARNING: This game is not for the light Hearted!!.