Most of the times, the best things in life are usually free, and you would not have to spend anything at all. However, sometimes you would really have to cough out a whole load of money if you want something cool like the Lara Croft Xbox 360 Mod here. In order to get this awesome case mod you would need to shell out $11,000 and only a few of these will ever make it to the public. 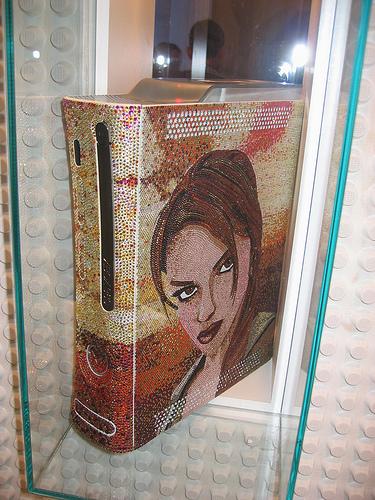 Each case mod comes with about 43,000 colorful crystals and is inspired by the Tomb Raider: Legends. The case mod is available only in Germany where it is already being marketed by official Xbox marketing team. If only such a thing were to be released in other countries, we would have almost seen a queue outside the retail outlet. The case mod whoever does not resemble Lara Croft in either her gaming role, or to Angelina Jolie who played the role of Lara Croft.

Angelina Jolie would certainly be pleased to see herself placed on Xbox’s case and her fans would love too! For those who don’t really admire her like me, we could satisfy ourselves remembering the game instead of the movie. You could check out the Weird Xbox Case mod which makes it look more Xboxish than in real. The Xbox 360 Chrome Case Mod can be used as a mirror.