Rock Band 3 has been available for exactly one week as of the time of this writing, but the Fender Squier Rock Band 3 Pro Guitar is still five months away. Specifically, March 1. It will set you back $280, and can be pre-ordered beginning January 1. 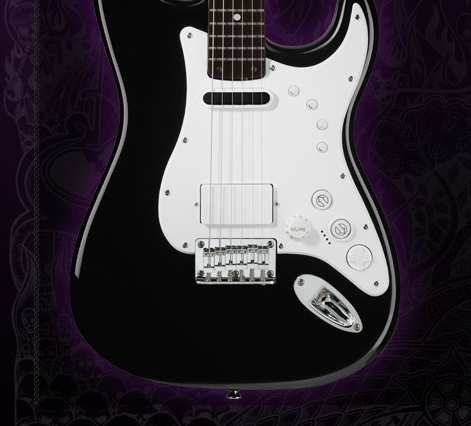 Today, Fender announced an official release date and a price point for their new Rock Band 3 controller, which takes the game to a whole new level. Unlike the mid-grade guitar by Madcatz, which retails for $150 and features 102 buttons (six strings across 17 frets) this is a 100 percent real deal electric guitar with additional midi capabilities. Both have their uses and functions, but where the Madcatz guitar is more of the instrument for those who want to take their Rock Band challenge to the next level (and perhaps learn a bit about the guitar while they are at it) the Squier controller is made for the musician who would get use out of their dual-purpose guitar.

While $280 does sound like a lot of money to drop on a controller at first (and it is), this device is reasonably priced for a midi guitar or guitar synth, which only a few years ago could easily set the user back at least a thousand. In addition, just as with any electric guitar, this one can be plugged into an amp and played. We should also mention that the guitar needs Mad Catz’s Mido Pro-Adapter (in order to work with Rock Band 3), which retails for $40 (or $30 on Amazon!). So that makes the true cost of the guitar $320.

The downside for this model is that you will have to change strings. Hey, you want to roll with the real guitar, you have to pay your dues and change the strings from time to time.

Gateway drug often has a negative connotation, but this guitar coupled with Rock Band 3 may actually be the gateway drug that gets a kid learning the guitar–maintenance and all.

Speaking of innovative controllers, Microsoft’s Kinect for Xbox 360 is now available, and you know it’s cool because it’s received the Oprah seal of approval.