Cyber Monday and Black Friday are the best possible times to get new consoles, and if you’re looking to jump straight into Call of Duty, this deal is for you. 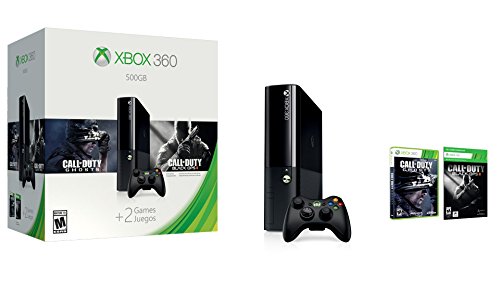 The Xbox 360 has been our favorite machine and our greatest companion for about 10 years, but surprisingly, it just keeps giving and refuses to stop being awesome in the face of its competition, the Xbox One and PS4. It’s just a very focused console, that knows its strengths, and it is one of the most fun consoles when all you want to do is jump into a few quick rounds of the king of FPS and military themed video games, Call of Duty. This series played a key part on popularizing console shooters and multiplayer as we know it today, and its games are still widely played all over the Xbox servers which don’t seem to be ready to go out any time soon.

, which includes a 500 GB console, a month of Xbox Live to play online and download games for free, and digital download codes for Call of Duty Ghosts and Call of Duty: Black Ops 2, the two best entries in the series in the last few years. This bundle is currently a deal of the day, and you can buy it for $256.88 USD, which is barely the price of an Xbox 360 with a smaller hard-drive and only one of the games – so it’s a fantastic deal overall. The Xbox 360 seems to still have a lot of life going, and if you have missed on what has been the best console of the past generation, now is the time to catch up before moving on to the Xbox One.