Geekish fashion has been dominated by cufflinks for quite some time and the reason for this could be the obsession of guys with geeky jewelery. 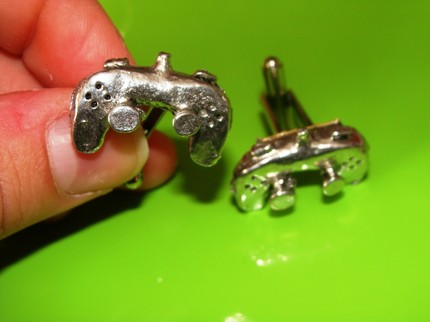 Cufflinks define what a man is, and when a guy wears cufflinks that are inspired by consoles, video games and accessories, it is easy for people to understand his quirks, interests and needs. Thus, these cool silver tone cufflinks that are inspired by Xbox controllers would be great gifts for Xbox fans who are also interested in accessories and fashion. The cufflinks cost $13.99, and come with a silver tone which almost looks like real silver.

They would look great on anyone who would want to project a geeky image, and is thus a good gift for Xbox fans, who might be complaining about the lack of fashionable accessories that they might have. You could also take a look at other cufflinks that we have already written about like the Xbox Controller Cufflinks in blue and brown, and also the Halo 3 Cufflinks which look pretty cool.