Microsoft has officially opened their Xbox LIVE rewards program for Xbox owners who like to drop tons of cash on the LIVE Marketplace. 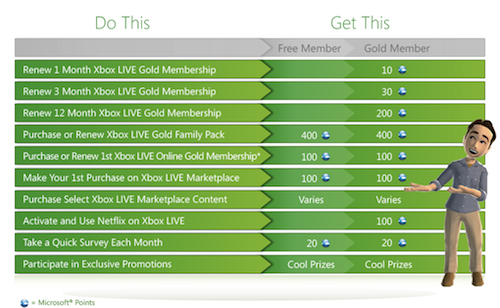 The service reportedly began testing over a year ago, and has finally gone live today. It’s basically a rewards program for users who like to buy content such as Avatar gear, Xbox LIVE Arcade (XBLA) games or renew their Gold member subscriptions. Those users will get goodies such as Microsoft Points, which are used for purchasing XBLA games, downloadable Content (DLC) and more.

It’s a nice way to convince users to buy content, of course some have already purchased their first bits of content, so this may not do much for them. Still, taking a “quick survey each month” can’t be too bad for 20MS Points, can it?

This isn’t so bad considering they raised the price on Xbox LIVE Gold a month back. Of course it’s not a huge payoff, but it’s better than nothing. Still, given the amount of care Microsoft seems to put into their online network and how their users interact, we can’t be too critical. However, the PlayStation Network is pretty good for online multiplayer, and it’s free. Still, their focus doesn’t seem to be as online-oriented as Microsoft’s.

Oh well, all part of the business. Take some of the good with the bad. As long as we all get to play and enjoy the games at a price we are willing to pay, things are good. Just don’t get it get too high, Microsoft (but if you’re like us, you bought a 1-year card a few months ago to avoid the price hike).

Here’s some info on Microsoft’s Xbox LIVE pricing, which came into effect last month. Personally, we’d like low prices and great service. Oh well, it’s like they say, can’t have your cake and eat it too. Unless it’s this one. (Sorry, we just had to throw in a silly cake joke for that, and the Portal thing was played out long ago.)