Xbox 360 Controller Seat is Made up of Cardboard

Well, everyone always dreams of owning the Xbox 360, Xbox 720 console, or even Xbox 1080 Handheld, but have you ever dreamed of sitting on one? I don’t know how an idea crazy as this one come to the minds of the masses, but this is what whitethrashmandy has made: an Xbox 360 controller shaped seat for two that perfectly fits the craziness of the thought. 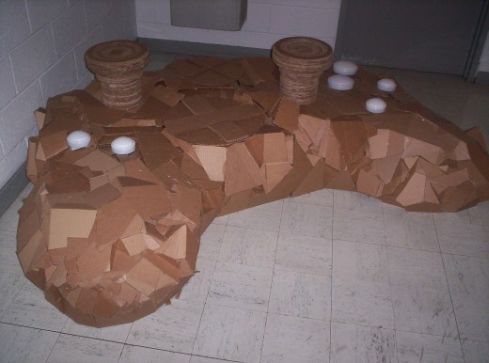 The whole thing measures approximately 6 ft long x 2 ft tall, making this art work really huge and is completely made up of cardboard and glue (except the torch light, of course). All in all, this piece of art is something that an avid Xbox fan couldn’t afford to miss, but alas! The user hasn’t posted the details of selling this stuff.

Other Xbox art that you must not miss out are the geeky Xbox 360 cakes, that are yummy and geeky at the same time!