There have been a number of mods that combine different consoles together to get something cool, but none were made with Lego I suppose. Johnny has created a game system that combines the Super NES and the Xbox 360 and has dubiously called it the SNEX. 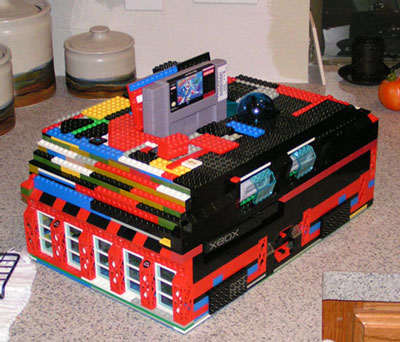 While only the name seems to be dubious, the console itself is quite cool and awesome though it looks hefty. The colorful Lego building blocks hold the two consoles together to give the gamer a unique opportunity to play NES games that are quite outdated and also the modern Xbox games.

The SNEX game system almost looks like a child’s toy and is quite unassuming in its charm. Nevertheless it comes with a well protected exterior and must be more interesting to watch it than use it to play video games. I would certainly recommend it to any old fashioned NES fan who is crazy about Lego creations but also is somehow curious about games that can be played on the Xbox.

Johnny is planning to create more such gaming systems that would involve a combination of Game Cube, PS2, Atari 2600, and/or PC. I would certainly wait and watch for that and if he creates them using the Lego blocks as well, it would fill half of my room! If you would rather have a dedicated Xbox mod, you must check out the cool Xbox Mini LCD Mod. The LED Xbox Mod is amazingly futuristic and would appeal to science fiction fans.