When the Xbox last updated it’s dashboard, it was quite the change. With the next update, it appears that Microsoft hopes to really change it up once again.

It comes to no surprise that Microsoft really wants to push Kinect integration in almost anything they can that involves the Xbox. With the next dashboard update, they hope to integrate it into not only games, but also right from the moment you turn on your Xbox.

In my opinion, it looks quite similar to Windows 8 reveal, but the next dashboard update does look like an improvement. The ability to quickly switch to different panels in order to access your favorite things seems like quite the improvement. One of the first things I noticed was that on the bottom right of the screen, it appears that the Kinect attempts to identify who is playing and log them in accordingly. That is impressive and pretty neat. Apart from first glances, the software seems to operate on gestures, voice, or the controller. On the screen, viewers will notice a hand, and I’m assuming this is the user moving their hand around to browse tabs, but I wonder if the controller will be able to do the same thing, allowing to move a “cursor” around the screen to select things. 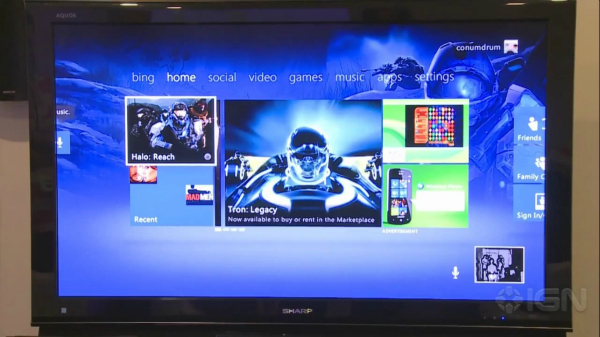 Users can also use their voice to control the screen. This also enables users to use the voice search feature, allowing you to search for movies, games, music, and more through Bing. This new interface really brings some awesome new features, and you can check out the video below to see the full run-down of all of the features!

What do you guys and gals like or dislike about this update? What would you rather see, and what do you like about the current dashboard? Let us know in the comment section below!

If you liked this, you may also like to read about Elder Scrolls V: Skyrim – E3 Gameplay Footage and Bioshock Infinite E3 First Look!