Xbox Live Arcade games can be fun, witty, and unusual, all for a pretty low cost. For this featured  arcade game, you might be better off spending your 80 Microsoft Points elsewhere…

As the name suggests, the games that are included in 10 Amazingly Awful Games could be the worst of the worst. To start with, players are presented with a menu that could resemble something that my mothers late ’90s cellphone could reproduce. The menu is pretty straight forward thankfully (unlike some of the games) and gives you the option to play one of it’s ten games. I decided to jump right in to the first game, All Your Beans Are Belong To Us. 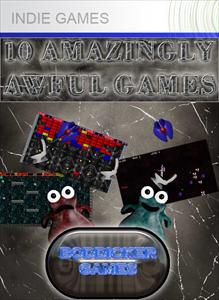 Having no idea what to expect for this game, I jump into it and I am shown a sort or instructions menu. It reads:

“Billy The Blob loves to eat Baked Beans. He just can’t get enough of them, but the other blobs don’t want him to eat them. You must use superior speed and wind to help Billy eat all the beans!”

Ok, sounds pretty straight forward. I click start, and I am immediately presented with a game whose music could be that of insane asylums across the country. If it isn’t, it surely could be the source of many false inductions to these asylums, as it could drive people crazy until they turn it off or mute it. In a sense, it is a Pac-Man type game, where one has to move their character around, avoid the bad characters, and collect little red circles in the maze. You do have one power-up though, and this is the ability to fart (we’re not even remotely kidding here) which will stop and freeze your enemies if they’re within a certain radius of you. I made it through three levels before the music started to make me hear voices in my head, so I knew it was time to turn to another game. 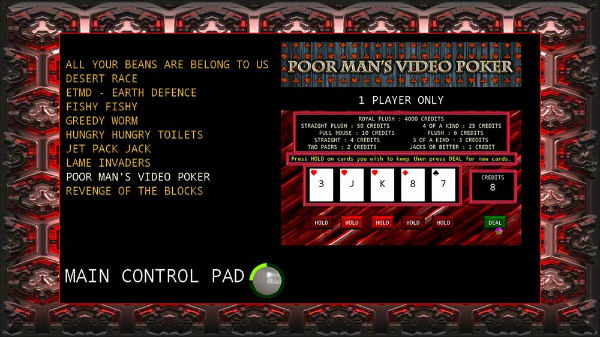 Out of all the other games, Desert Race was the game I spent the most time playing (around nine minutes). The instructions read:

“You must drive as fast as you can to get to each checkpoint. Avoid enemy cars along the way or shoot them to get bonus time. You get some extra time whenever you hit a checkpoint.”

This time, the music made me feel like I was being watched the whole time as it is really mysterious/dangerous sounding. Not too bad though, so I play the game, and it’s quite straight forward. Drive the car, avoid enemies, and receive more points and time for shooting enemies. Pretty basic, sort of fun. Still not keeping my attention though. On to the next one.

ETMD – Earth Defense is a shooter game where the player controls a space ship that must shoot down alien enemies. The instructions read:

“Earth has had it’s first encounter with alien life and it’s not friendly. You must not let any aliens past you or they will attack our planet. If the Earth’s defenses reach 0% it’s game over!”

These were the most basic commands up to this point, move and fire. Sounds good, but wait, I can share the terrible experience I’m about to have with up to four players?! Let me go get my sister… After making her play with me for no more than eight minutes, we realized that this game wasn’t anything special, but it was kind of fun in a really-cheesy kind of way (maybe that’s why they made it into a full-fledged game?). In it’s purest sense, this game is radically simple, and something we have all played before. Don’t let the enemies destroy the shield, and you will rack up more points. Plain and simple. There was another game included in this pack called Lame Invaders that was almost similar to this game, though it is more of a side scroller, as opposed to the downward movement of ETMD. 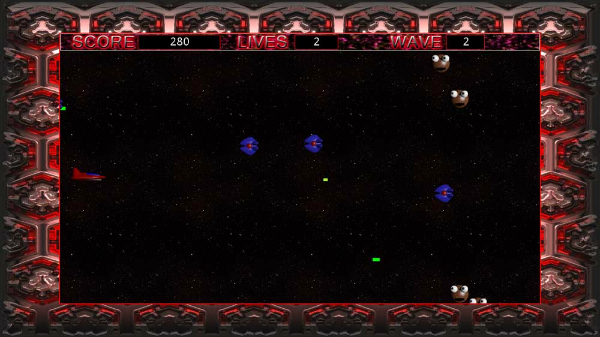 Next up were four games that I just could not wrap my head around…at all. Fishy Fishy, Greedy Worm, Hungry Hungry Toilets, and Jet Pack Jack. These four games…I just don’t even know where to start. The music, the concept, the instructions (or lack of). It was all so bad. In Fishy Fishy, players must eat other fish to receive more points, which I though also meant you would become bigger and be able to eat the bigger fish. No, totally wrong, why would that be possible? Greedy Worm is a simple “snake” kind of game, but when you start you are not indicated (at all) to which worm you are using. You can play with up to four players, but it’s really just a mess of confusion. If you do manage to figure out which snake you are at the beginning of the game, it’s really easy to beat the A.I. (yes, I was playing by myself again because my sister thought this was the dumbest thing ever) and ultimately wrack up a lot of points. 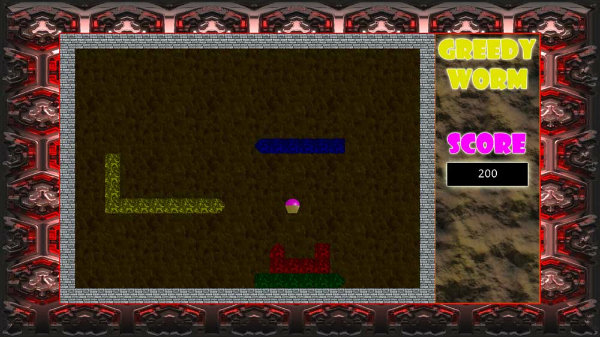 Hungry Hungry Toilets…I  don’t even know where to start with this one. I was highly amused by the fact that I had to control a toilet and eat oranges to score points. No matter how hard I tried to do otherwise, I always seemed to get stuck in an infinite loop of paralysis from the other toilets jumping on top of me. The sound affects were that of a gunshot and some kind of a space aged spring. Terrible. Lastly, Jet Pack Jack is just weird. It’s an easy game with weird visuals, amazingly frustrating controls, though a very easy concept; get the crate to the door (which looks more like a warp zone from Stargate or something). Thankfully you can shoot the enemies. Oh, but you cannot aim it, you can only shoot forward. No aiming at all, which means the high up you get in the levels, the more impossible it gets, as you cannot shoot the enemy coming at you in a diagonal pattern until he is in your face. Fun, right?

Only two games left, and I’m ready for some fun. I decided to try Revenge of the Blocks first, which is a brick breaker type of game, but in this game the blocks will shoot at you and you must dodge them. Honestly, this one wasn’t too bad. It was really easy to figure out, and a really cool twist on the classic brick breaker game type. The music made me feel that I was jacked up on caffeine and running from monsters, but it was fun nonetheless. 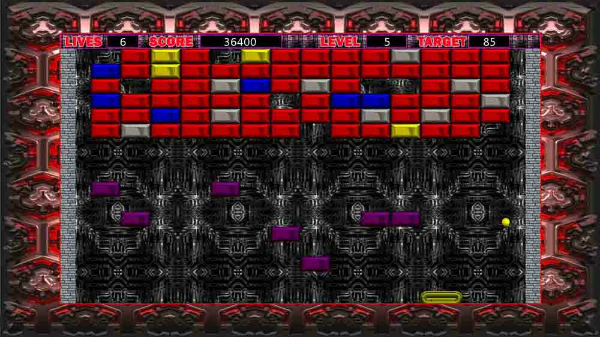 The last game, Poor Man’s Video Poker was the one I enjoyed the most. You cannot really screw up poker, and this provides some cheap and easy comfort after all those really awful games. So should you buy this game pack? Absolutely. Not only do you get to listen to some amazing music, but you get to be reminded of how well put together real games are. I would be willing to wager that there has never been a game that you have played that has been as bad as this game pack, and that is a plus. Sometimes, though, we need to be shown the worst in order to really appreciate the best. For 80 Microsoft Points, I would certainly suggest you go and purchase this game, get some friends around, and really have a good time, because it is good for that. It will certainly make you laugh, might make you start to go a little crazy from it’s music, but ultimately, 10 Amazingly Awful Games is exactly what is says it is, awful and a game.

If you liked this article, you might also enjoy our hands-on review of Dungeon Siege 3 (Demo) and L.A. Noire.