Irrational games presented an exclusive 15 minute gameplay demo at E3 of Bioshock Infinite, and it seems like this entry will be every bit as twisted as the first two titles in the series. 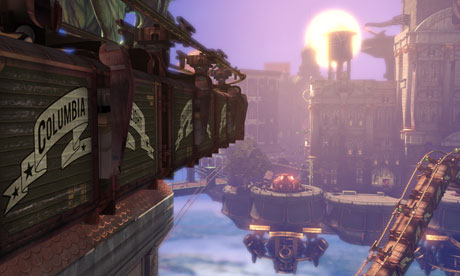 Bioshock Infinite takes place on a flying city called Columbia. According to sources, the city was built at some point in the late 1800s as a sort of fairgrounds exposition, to promote American culture and greatness on the world stage.

However, while the idyllic setting soon turned into a nightmare after the residents of the city opened fire on civilians during a rebellion in 1900.After that incident, the American government disowned Columbia, causing it to float away and act as an independent entity.

On the city two opposing factions developed, one called the Founders and a break away group called the Vox Populi. Despite their benign sounding names, both groups are equally violent and terrifying forces that players will encounter as they navigate Columbia.

Players are placed inside the shoes of the main character, a detective named Booker DeWitt, who journeys to the city to find a kidnapped woman named Elizabeth. In the demo players manage to find her, and rescue her from a demented jailer called Songbird.

Players soon learn that Elizabeth has some very odd supernatural powers about her, allowing her to manipulate the environment in a variety of manners. She believes that the people of Columbia did something to her which gave her the powers, and wants to find out more before she leaves. However, just before the demo ends, her sense of freedom is crushed as Songbird ambushes the player and retrieves Elizabeth. 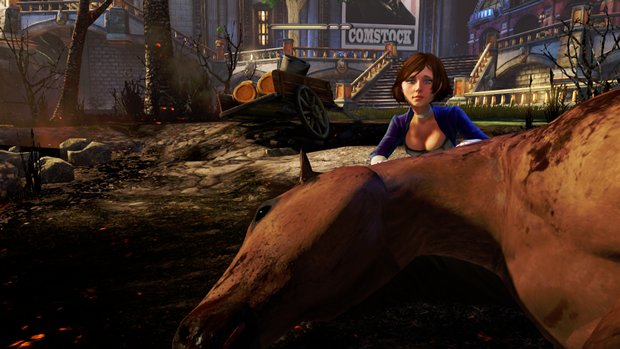 Some of the players attacks and abilities were showcased in the demo. The shooter elements from the previous two entries return largely intact, allowing players to wield handguns, shotguns and a variety of bizarre pieces of technology.

On the more interesting side of combat, players will be able to learn powers called “vigours” which like magical abilities. With vigours, player will be able to toss enemies around in the air like rag dolls, and even call in flocks of birds to attack their foes. 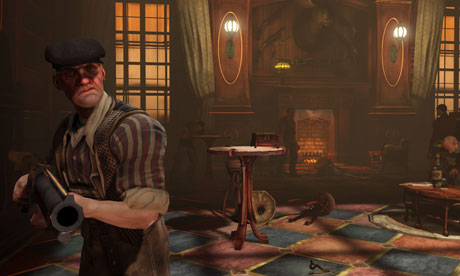 As well, Elizabeth, when present, can also be called on to provide assistance. She can change the environment by providing barricades for the player and even bringing in turrets to harass enemies.

In all, the third entry into the series looks absolutely stunning from a graphical perspective. Not to put down the visuals of the first two games, but Bioshock Infinite offers a radically new take on design. No more dark underwater tunnels and claustrophobia: Columbia is a bright, wide open world which still manages to be terrifying. Feeling uneasy in the dark is one thing, but feeling genuinely nervous in the daytime, in a massive city is something much more amazing to pull off.

Bioshock Infinite will most likely hit stores in 2012.