In order to boost the sales of their next-gen console, the Xbox One, Microsoft is offering a $75 incentive to those who upgrade. 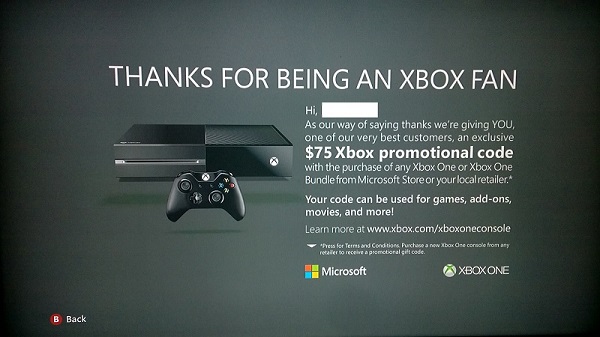 Your company is facing the biggest round of job cuts in its history, for whatever reason your CEO doesn’t feel that your gaming brand is part of the company’s “core” and against tough opponents your fresh-faced console is trailing just behind in the sales. Who you gonna call? The sales team! In Microsoft’s case anyway as the company has now launched an initiative for those who have yet to make the generation jump from the Xbox 360 and like the gamers on a budget that many of us are, we’re being enticed towards Microsoft’s shiny new black and green game box, the Xbox One, with money. It does make the world go round after all.

How to get in on the Xbox One upgrade program is anyone’s guess as many Xbox 360 users both UK and stateside (in both the US and Canada) have turned on their old-gen console only to be greeted with an invite to it. While it’s not being offered to everyone and will be available in the “short term” (photos suggest that you have until the 31st of July to take advantage of it), Microsoft is giving the invitees (whom the company deems to be their “very best customers”) a $75 promo code once they buy an Xbox One or an Xbox One bundle. Games today often run upwards of $60 and the Xbox One is being promoted as a multimedia box, movies and all, so that figure can be spent on either of those things, plus add-ons and “more”, whatever ‘more’ means.

As for the chances of the promotions being rolled out to other countries around the globe, Microsoft are playing coy, simply offering this statement when prompted,

“This short-term promotion is offered to select Xbox fans in the US, Canada and the UK. We are always looking for opportunities to bring promotions like this to our customers, but we have nothing further to share at this time.”

That’s hardly great news for those outside the US, Canada or the UK then but the Xbox one does still have popularity to gain in other places so there is still a genuine chance that it’ll be rolled out globally, if Microsoft are serious about bumping up the sales stats anyway. We’ll keep you posted once we know more.

Read more on xboxfreedom, Microsoft E3 2014: Their best E3 yet, Want To Shape The Future of the Xbox One? Microsoft Will Soon Let You