Kinect, Microsoft’s magical non-controller controller. It tracks your movement via the built-in cameras and translates them into onscreen actions. 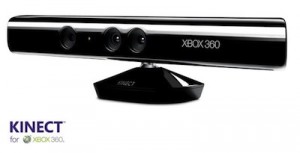 After nearly two weeks on the market, we are seeing all kinds of new uses for Microsoft’s motion sensing peripheral, the Kinect. All of these uses are coming from hackers who have been able to figure out how to use the device in ways that even Microsoft probably hadn’t imagined. One of the most interesting uses is this 3D camera.

Because of the two camera’s on the Kinect, which help it detect depth, a researcher from UC Davis by the name of Oliver Krelos was able to make the device seemingly pan around him. It looks amazing, and is probably the coolest hack we’ve seen for the peripheral. The device can’t actually see around and behind Krelos, which is why only half of him seems to exist in the video. When he pans around himself, it looks like a crazy half-scene. Regardless, the result in interesting.

According to Kreylos, the code was created “from scratch” using C++. He calls is a “virtual reality” software.

If that’s not impressive enough, he has also created a second video that shows him using the program to measure objects reconstructed in the 3D camera. He shows himself measuring the box that the Kinect is packaged in, then shortly after using a measure tool in his software to measure the box within the program he created.

He’s not stopping there, his next goal is to experiment with augmented reality.

“There’s more to come. I’ll try net to see if I can use the 3D views and put them into another 3D environment, in order to mix realistic people captured with the Kinect with the computer generated imagery.”

Sounds way over my head! Glad someone out there is smart enough to do it though. I can’t wait to see more from this guy.

In case you are wondering what exactly Kinect is, why not have a look at our previous posts covering the peripheral? We have talked in the past about some of the limitations of the device, and we have taken at look at the first TV claimed by Kinect.