GameStop, the world’s largest videogame retailer, has inadvertently leaked a neat bit of info. It seems that the Dreamcast collection is coming to the Xbox 360 and PlayStation 3. 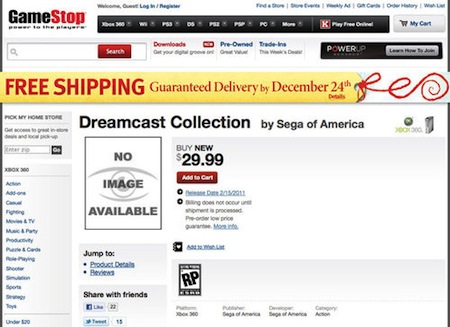 Though the listing has been pulled, a poster on the NeoGAF forums was able to grab a screenshot. We don’t have much information, but some are speculating that it’s likely to be little if nothing more than the Dreamcast games that are already available on the systems through PlayStation Network (PSN) and Xbox LIVE Arcade (XBLA), but boxed and priced at $30.

Some readers may not actually remember the Dreamcast as the system is over 10 years old, but it is widely regarded as SEGA’s best–yet, least appreciated–system. If you ask me, it was just a victim of bad timing. The system came around, but was overshadowed my the colossal sales giant of a console known as the PlayStation 2 (PS2). The fact that SEGA had a few rounds of poor judgement with some of their previous gaming machines (Sega CD, 32X and the SEGA Nomad) didn’t help, and gave Sony the edge that helped them lead in the next console generation. Somewhere along the way, Microsoft decided to join in on the console market with the original Xbox. The competition from Nintendo, Microsoft and Sony turned out to be more than SEGA could hold up against and they dropped the Dreamcast.

Several years later, we are playing SEGA games on various other platforms, including the Xbox 360. It’s still a shame to see SEGA out of the console business, even all these years later, but let’s just hope that they can continue to release games like Vanquish for a long time.

SEGA isn’t the only game maker we love. Why not check out some great work inspired by Capcom, makers of the Street Fighter series? Or if Western-based games are more your thing, why not have a peek at this Rock Band 3 Pro Guitar by Fender.