Here’s the complete rundown of what we know about Mass Effect 3’s new cooperative multiplayer feature. 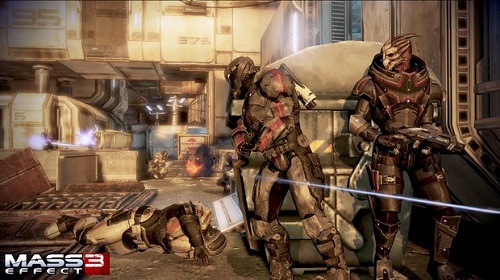 All those of you who started getting nervous when this component was released, and rumoured to be integral to completing the single player story can rest easy: the new Mass Effect 3 multiplayer component is completely optional.

According to our source, the multiplayer component only offers an alternative way of reaching the best ending in the single player campaign. Fortunately, you have the choice of either becoming a single player completist (like many of us have been in the past two entries of the franchise) or doing slightly less exploring in single player while making up for it in multiplayer.

The mode will be tied in to the campaign’s Galaxy at War feature, where Shepard will have to gather enough resources and support to eventually take down the reaper menace once and for all. Participating in this component helps boost your overall resources and chance for victory.

Basically it will be a cooperative survival mode, not unlike the dozens of others that we’ve seen in recent days. It will involve up to four people working together to hold off waves on increasingly difficult enemies. Except unlike all the new features and innovations to this genre of game play, like the building aspect of Gears 3 Horde Mode, this mode will rely solely on shooting, maneuvering and team work.

I’m sure that this will disappoint more than a few people, and luckily for them they won’t have to ever play it. But for the rest of us, who are at least curious, it doesn’t look so bad simply because it will be set in Mass Effect 3’s universe.

Players will have create characters unique to this mode, so don’t expect to see 4 Shepard clones running around. But at least they will have access to all the classes available in the single player portion of the game, along with the option of playing as any of the major races found in the universe.

You gotta admit it, charging in as a Krogan with a shotgun while a team mate provides cover fire with a sniper rifle along with biotics will probably be fairly cool.

There will be levelling up, though at this point it’s getting hard to tell if it will be persistent feature that stays with your character, or if at the end of each match you are reset. I’m leaning towards the former, but you never know.

On the whole, the component looks like it will try to stick with the same tried and true formula we’ve seen in other games, albeit with the Bioware touch. Just about everything they make is solid, polished and well balanced, so more likely than not, this mode won’t be the big disappointment people are fearing it will be.

In other news, be sure to check out our Top 10 Best Cooperative Games for Xbox 360 and Zombie Apocalypse is Back with Never Die Alone.