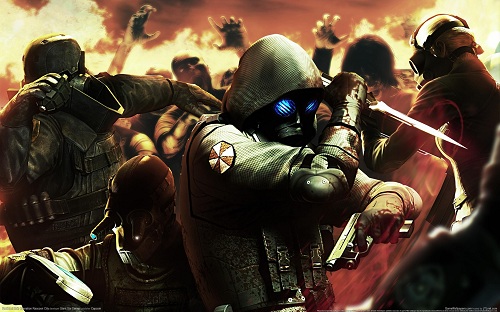 For those of you not in the know, Resident Evil: Operation Raccoon City is the upcoming next installment in Capcom’s long-standing Resident Evil series. This time, players will take on the role of the bad guys, playing as Umbrella operatives sent into Raccoon City during the events of Resident Evil 2.

Players will take on a wide variety of zombies and other creatures, as well as STARS team members and even, as some trailers have teased, Leon Kennedy himself.

This title marks another major shift in gameplay for the franchise. Following in the footsteps of Resident Evil 4 and Resident Evil 5, this title will be far more action oriented than the early games in the series. Players will be able to move in fully 3D environments with an over-the-shoulder 3rd person view of things and, surprise, be able to move and shoot at the same time!

I suppose that last addition will cause more than a few series diehards to shake their heads and groan. Despite the fact that Resident Evil 4 and 5 were (and still are!) great games, fans of the series cried afoul when it was starting to look like Capcom was moving away from its survival horror roots and focusing in action over tension.

Raccoon City looks like it will be picking up the cooperative elements of RE5 and taking them to a whole new level. Players will have access to playing as one of 6 unique characters over the course of the story, each with different strenghts and weaknesses.

For the first time, the game will offer cooperative play for a total of up to 4 players, over the 2 player coop from previous entries.

Resident Evil: Operation Raccoon City will be out March 20th 2011.

Be sure to check out our Top 10 Zombie Games on Xbox 360 as well as Multiplayer Details for Mass Effect 3.