We have come across dozens of Kinect mods and hackings that a new hack has to be extraordinarily special to catch our attention. This particular hack here has managed to do just that as it has been hacked to work with PlayStation 3. 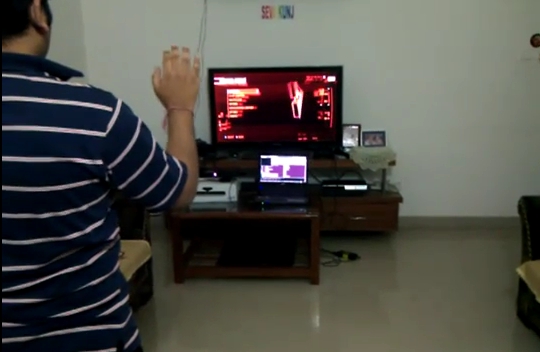 In fact, the demonstrator in the video plays Killzone 3 pretty tactfully, on his PS3. What amazes you is that in spite of Kinect being the crowning glory of Microsoft gaming industry, it can now be used with PS3, Microsoft’s arch rival. The demonstrator logs into his PS3 account with the help of Kinect by just waving his hand. He also explains that a double push allows you to ‘select’ and moving your palm up and down would be understood by the console as scrolling up and down.

When you wave your hand again, it allows you to track again. It looks funny when you observe the demonstrator’s hand movements and see that the way the console responds is still annoyingly slow. However, with the help of a few tweaks here and there, Kinect could be made to sync with the PS3 well enough to make sure that Sony’s console responds to your hand movements and gestures.

However, what I don’t understand is, why you would want to use a PS3 with a Kinect in the first place, as both the consoles have their own movement sensing devices which work well on their home consoles. The demonstrator also admits that the axis movements are terribly tracked while standing. However, they seem to work well while in a sitting down position.

Certainly the guy’s efforts are laudable and impressive. However, sometimes one also needs to think aloud why one would want to use a technology that is meant to be used with a certain console on a different console. You could also take a look at the Kinect Hack Stealth Camo and the Kinect Hack 3D Camera.