During Mucrosoft’s pre-CES keynote, CEO Steve Ballmer introduced the audience to the latest addition to Xbox LIVE, Avatar Kinect. It’s something we heard about a few days ago, thanks to a leaked image that made its way around the internet. Now, we actualy know what it is. 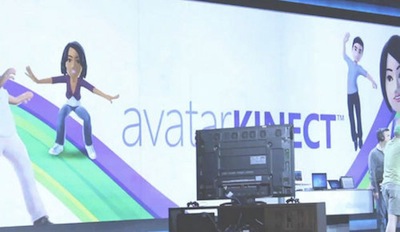 Think of it as virtual world where Xbox LIVE friends can log on and chat through their Xbox Avatars in real time, with Kinect. The sensor tracks their movement and their chatter and animates their character accordingly. What’s most interesting is that it takes Kinect further than we thought it went based on the first two months of release. Ballmer confirmed that it tracks facial expressions (such as your mouth movement and raising of the eyebrows), and it even appeared to track fingers based on the Avatar movement we saw in the video (below).

Microsoft had prepared a reel, showing friends in various settings having conversations with each other. While the highlight video itself seemed rather cheesy, it showed off some very promising features for Microsoft’s motion-sensing camera device.

From the looks of it, users will be able to upload their videos onto the internet and share them on Facebook. We think that is going to lead to a lot of DIY talkshows by Kinect users. Who knows, we may have a new virtual version of The View that’s actually somewhat tolerable (wouldn’t count on it).

There is some good news, the service is going to be free to Xbox LIVE Gold members. Looking back, that may be why they raised the price. Still, it would be nice if they’d implement a tiered system for those who want all the extra bells and whistles.  If that were the case then those who just want to play games online can pay a much lower price and everybody is happy.

There is no specific launch date, but it we should be seeing it this spring. For now, we will be playing Dance Central with our Xbox 360 and Kinect setup.

If you’re interested in reading about some of Kinect’s other uses, you can check out this cool stealth camo hack. Just as long as no one breaks any more TVs, it’s all good.