Gamers take on a social stigma that can be less than attractive at times; fat, lazy, and unmotivated. With the innovation of the Kinect, though, Microsoft hoped to get gamers off the couch and more involved in their games, and it just got even more motivating.

Kinect PlayFit is the newest on the line for Microsoft, and a free add-on for all Xbox Live users. Introduced this week for US users (and later this week for outside of it), the add-on is a totally new dashboard that acts as an interface with many Kinect games. Presumably, any game that requires you to move your booty will begin to track your caloric output, giving you a neat and new way to track your usage, and also see how much work you’ve been doing! 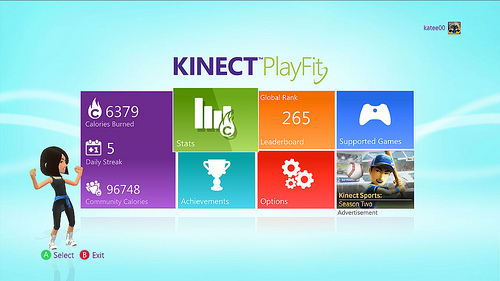 For people like me who like to see their results from their workout, this is a great way to see immediate results. Anyone who has ever worked for a goal when exercising can tell you that immediate results hardly ever occur, and being able to easily track your progress and results is definitely a confidence booster. For an added bonus, you can even begin to track your progress across leader boards, new sets of achievements (and thus more Gamerscore), as well as avatar awards. All of this is sure to give players extra motivation if they’re competitive or like to sexify their avatars (I’m pretty partial toward the Ray-Bans and Portal 2 prop that my avatar sports).

The Kinect truly is a very entertaining piece of technology, and with it’s many versatile uses, there are surely endless amounts of applications, but will this really sell to customers and keep them interested in the long run? Workout and fitness devices have never had a huge share of the game market, and while managing some sales, it would not seem absurd to believe that these sales are based off of impulse purchases that have driven the entire “lose weight fast” industry for years now. Most of these games are probably not played for more than a few hours, or even more than twice, before being put at the bottom of the stack under games that entertain. Hopefully, the technology behind the Kinect can find an awesome niche or use that can be implemented into many games, for as it stands, it is an easy way to navigate your home screen, or play Fruit Ninja with.

Therein lies the breaking-point of these games and ideas; people sit on their couch, grab a controller, and put in their favorite game to entertain and relax, and the Kinect cannot provide enough of that. Sure, some people have turned their Xbox 30s and PS3s into Netflix or Hulu machines, but in the end, it is a game system that is intended to play games on. Yes, these exercise initiatives are great ways for people to burn calories, but can someone really stick to a game or two to lose weight over the course of a few months or a year? Probably not, because that would get incredibly boring without any new content. Sure, the games can add new music or whatever, but there still needs to be more. The process of losing weight is never going to be easy, nor is the process of keeping people entertained. Developers may be able to entertain children and tweens with games that are mindless and require little attention to detail, but adults are of more enlightened minds and will require more stimulation, more challenge, and more diversity.

What do the readers think? What direction should the Kinect move, and in what way do you see it playing a role in the next generation of consoles. Let us know in the comments down below!