In The World of Videogames, Even CEOs Fight

Electronic Arts and Activision CEO Bobby Kotick are dealing the blows, and although it ain’t pretty, it’s a bit entertaining. 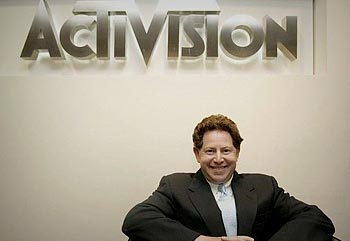 This originally started a long time ago when Vivendi acquired Activision. Brütal Legend, a game in development by Double Fine Productions, Tim Schafer’s studio, was dropped after the acquisition.

Eventually, EA was able to pick up publishing rights for the game. Brütal Legend received a lot of hype and exposure, and somewhere along the way Activision and EA got into a legal dispute over the title. Eventually, the game was released by EA.

Unfortunately, it flopped commercially, and was met with mixed reception.

Years later, Schafer was being interviewed and the subject came to Bobby Kotick. Schafer called him some names you wouldn’t say in front of your mother, and the Internet exploded. Schafer later realized that his statement had gone a bit too far, but the damage had been done.

Fast-forward a few months and Kotick has his own words about Mr. Schafer. Most related to his work ethic, calling him unprofessional and saying that he always missed milestones. He even went on to say he had never met Schafer in person. He says he had a meeting, “the guys said, ‘He’s late, he’s missed every milestone, he’s overspent the budget, and it doesn’t seem like a good game. We’re going to cancel it.'”

“It’s sad is that instead of just insulting me personally, he goes after the product of my hard-working team – a group of people he almost put out of work a while back. But what’s even sadder is that it took him two months to think of a comeback.”

Well, Kotick did have a few things to say about EA as well:

“The core principle of how we run the company is the exact opposite of EA,” he says. “EA will buy a developer and then it will become ‘EA Florida’, ‘EA Vancouver’, ‘EA New Jersey’, whatever. We always looked and said, ‘You know what? What we like about a developer is that they have a culture, they have an independent vision and that’s what makes them so successful.’ We don’t have an Activision anything – it’s Treyarch, Infinity Ward, Sledgehammer.

“That, to me, is one of the unassailable rules of building a publishing company. And in every case except for two, the original founders of the studios are still running the studios today. The only thing that we try to do is to provide a support structure to make them more successful. If you do a really good job – and a lot of our studios do – you get to pick what is, in my view, the most difficult thing to pick in the industry: to make original intellectual property.”

Of course EA didn’t sit back and take the criticism, EA’s corporate communication VP Jeff Brown swung back with the following:

“Kotick’s relationship with studio talent is well-documented in litigation. His company is based on three game franchises – one is a fantastic persistent world he had nothing to do with; one is in steep decline; and the third is in the process of being destroyed by Kotick’s own hubris.”

Gotta love it when rich guys in suits talk crap about each other. In all fairness to Kotick, though most gamers and developers seem to think he’s a jerk, he has been able to keep his company going strong.

Here’s a game with a little less drama behind it, at least from the consumer’s end, it’s Halo: Reach. When you’re finished checking that out, why not drop by and check out some awesome Xbox 360 mods.