If you believed that the inside of your Xbox controller is made up of innumerable circuits and wires then you are  probably mistaken, as per a recent study conducted by “Madspeitersen” the internal parts of an Xbox controller quite resembles the internal organs of that of a human, thus sparking new debates in both the scientific and the gaming world. Have a look at the picture if you think I’m bluffing. 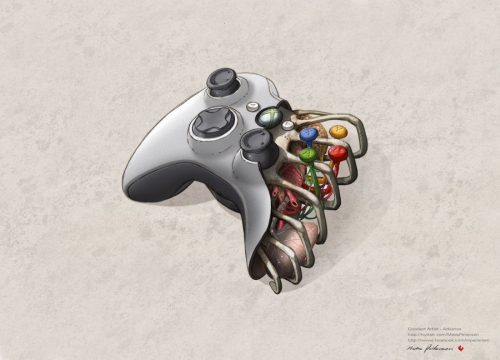 Now that you have a clear view of what I’m trying to bring to you, you guys might have probably looked through the dumb intro I penned down for this particular post, but the real point of this creation is to try and demonstrate how far gaming has penetrated into the human life and the fact that it has procured a life of its own.

On close observation you can see that the artist has framed the controller in the form of the human ribs and filled it complete with a set of human organs like the lungs and heart. The cool creation reminds us that everything around us has a great impact on our lives and that we are all connected to each other in the life stream.

You can also have a look at the other cool Xbox stuff like the Xbox controller Cuff Links, perfect for your geeky uniform or the cool controller buttons coaster set that will make any drink a fun one.