When I saw a Hack-and-Slash RPG, I was instantly excited for Hunted: The Demon’s Forge. How did it fair, where did it excel, and did it hold up to my expectations?

Hack-and-Slash games have a way of just captivating me, as they are generally easy to play with a very easy concept. The later of this holds true for Hunted, though I think that “easy to play” is not necessarily the best combination of words for this title.

At first, the game seemed great. The fact that I was in control of two characters was really cool and interesting, but that though was quickly dissolved when I learned that I could not freely switch unless I was at a Switching Stone. While this was only a mild disappointment, I was still upset… I really wanted to switch whenever… Nonetheless, I trucked through the campaign, and it was generally fun. The controls felt a bit clunky though, and an odd interface for giving new abilities to your characters did not help. I was certain that I could level both of the up individually, but I really could not figure out how the Crystal distribution worked. To clarify, if you have three Crystals to use, both of your characters have them to dispose of. On top of that, this game is clearly meant to be played with a partner, as your AI partner can be a really big pain, specifically when you are dead or trying to light a brazier/push a wall. Telling your partner what to do is easier said than done, and even though you just have to hit “B”, there seemed to be no response at times. Add the fact that Elara, one of the two characters, liked to stare at my oversized and steroid abused body as I lay dying on the floor until she saw fit to give me a revive and you have reason enough to quit single player and head to find a friend. 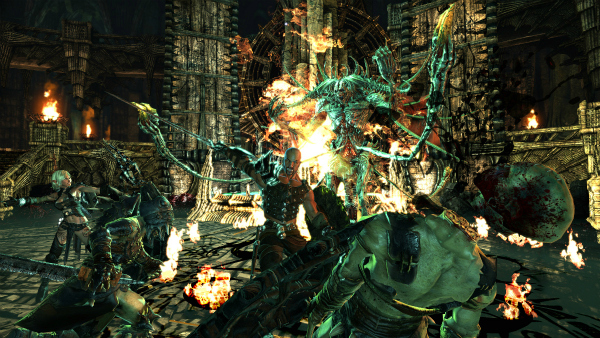 These two characters weren’t completely useless though, as their conversations were, at times, quite funny and humorous, and when couples together really perform well. I wish I had been able to maximize on both of their sets of abilities, one melee and one ranged, during the single player campaign, but it was apparent that they were very useful when playing with a partner. While playing with a friend does add the safety of not having to worry about the AI, the AI does do a fair enough job, sometimes dropping everything to come save my butt from death. 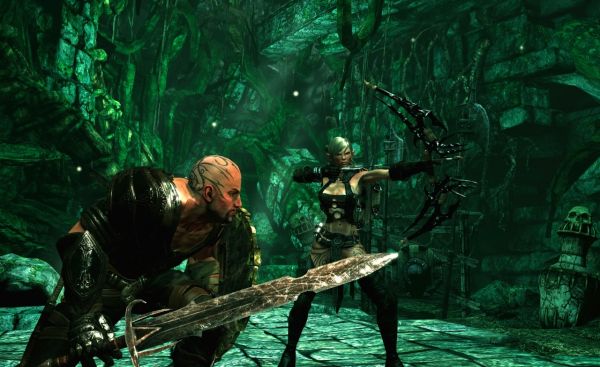 At times, I felt that the game had been incomplete, as there was many times where I could not figure out a way (at all) to get to the “secret weapons” or other random areas. On top of that, I did not like the controls much; mainly the control over the AI (if one was playing with one. Overall, Hunted: The Demon’s Forge is an okay game with a decent story, though one that is quite predictable. If you have a friend to play with, it is certainly improved, but I still would spring for other multiplayer games that offer much smoother and denser game play.

If you liked this article, you might also like to read the Hands-On Review for Brink and L.A. Noire!