Duke Nukem is a classic and iconic game series that many have grown up playing over the years. Since it has been 15 years since the last installment in the main series, this game has many people expecting gold, but did they receive it?

On its surface, Duke Nukem Forever starts out with the same old Duke that we all loved and knew. The egotistical, steroid pumping hero is back to kick ass and chew bubble gum, but he seems to be out of bubble gum again. With an arsenal of weapons, power-ups, and hot chicks, Duke surely comes out to show that he is the same old character as ever.

Before I played this game, I wanted to get a taste of the original, as I never had the opportunity to play it as a child (to my knowledge). After playing the original, I thought I was ready to play Duke Nukem Forever (DNF). Thankfully, DNF makes the transition quite easy, because right off the bat it is clear to see that players are controlling the same old Duke. After viewing a really awesome and short cut scene, you start the game with Duke in-front of a urinal with the instructions to “press RT to piss.” After this quick and short tutorial, the player proceeds to move onto a level in which the game really showcases its Duke Nukem feel, also helping the player become acquainted with the controls.

The story of the game was pretty good; we’re talking about Duke Nukem here, not Alan Wake or The Elder Scrolls type games where the story is a massive and/or elaborate one. I loved the “Ego Boosting” aspects of the game, allowing you to boost your Ego (Duke’s Health) by doing various funny activities, such as pinball, bench pressing, slots, and many others. Duke Nukem is, in itself, it’s own genre and style. Graphically, the game might not have performed, as the engine and graphics seemed a little dull, but then again we’re not talking about a game that is mean to wow fans and critics with its amazing display. The game certainly kept up with it’s own style in the newest installment of the series, and I could not give enough praise to it for that, and I’m certain that old players and fans of the series will enjoy that aspect. What I had a hard time with, though, was the actual game play. The controls felt clunky at first, but they were something that one can easily adapt to, and thankfully the option is provided to change the layout of the controller (which I did). Next, there were times where I wondered where the developers were getting these ideas. For instance, in one of the first few levels, Duke is shrunk down and forced to ride around in an RC car for 1/3 of the entire level. While this is fun, I just didn’t see the point of this, because after finishing my use of the car, I just had to backtrack the entire way to stop the aliens. I understand why I had to backtrack (for story purposes obviously), but I feel that this could have been implemented better. 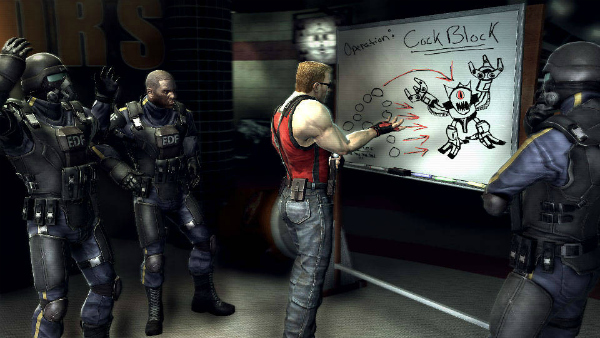 My next complaint was on the difficulty settings. As someone who always goes for the hardest difficulty, I of course started the game on Hard, and eventually tried out the other two difficulties to see how the compare. In my opinion, they are not evenly proportioned. Easy is certainly easy (as it should be), but between Normal and Hard, I felt like they were both “Hard,” in that normal still offered a tiny bit more damage to enemies, and the same damage from enemies (compared to the Hard difficulty).

For my final and last minor complaint, I was quite upset that I could only carry two weapons. I just wanted to be able to carry more, especially since it seemed illogical that I could carry a Rocket Launcher and a Minigun, and that took up the same amount of space as a Pistol and a Shotgun.

Overall, Duke Nukem Forever was a really fun and refreshing game, and while it didn’t become a game that will wow everyone; it certainly delivers on the fun aspect. I think with a few tweaks (and the ability to carry more than two weapons…), this game could really stand out to be seen as great as the originals. For those of you who are looking for the original Duke Nukem, he is certainly present in this game, and if that is all you’re looking for then you will certainly enjoy this. For those of you looking for another great game to endlessly kill enemies and cause carnage, you will find that too; though do not be surprised when you find yourself wondering when you will be able to shoot aliens once again.

I’d love to hear what the readers have to say about this game, and also play with the Xbox Freedom community members! I encourage you all to come play with my over XBL! Send a friend request to Killer Penguinz (with a space) and we can mop up some n00bs sometime on your favorite games! If you liked reading this, you may also enjoy our hands-on reviews of 10 Amazingly Awful Games and L.A. Noire!