Treyarch really impressed people with their support and on-going additions to the Zombies franchise in Call of Duty: Black Ops. Since release, the game has done amazingly well, and with the release of Moon, they only hope to improve it once more.

Hands down, Call of the Dead was my favorite Zombie map. Since release, I have had the maps from World at War and enjoyed them all (especially Shi No Numa), though this new map, Moon, is incredible. Treyarch always finds a way to make new maps in Zombies interesting, and this one is not one to skimp on that. While I could write about all of the new maps that were released, they really aren’t new, therefore I don’t think my commentary would be as interesting to most. Therefore, let’s jump right into Moon.

When players start Moon, they are thrown into a small area where a free-for-all will start shortly. Not knowing this, I decided to try and earn a few thousand points before venturing off.

Well that didn’t last, very long. I quickly died and had to restart. No biggie, time I decided to head into the teleporter looking thing and hope for the best. When I did, I was thrown into a space station where I was in a vacuum. My first time up here, I had no idea that I had to grab the space suit right in front of me (must have just not seen it at all), and quickly suffocated. After putting it on, it becomes obvious that one cannot use items with the suit on, though the suit can be taken off for short periods of time to deploy devices.

After earning a round-full of points, I decided to head off, and after carefully considering my two options, I chose the path toward building 11. It doesn’t really matter though, as unlocking one door opens them both up. On first try, though, I decided to head around, grab the Carbine, and head into building 6, though I should have chose 11 (more on that in a minute). 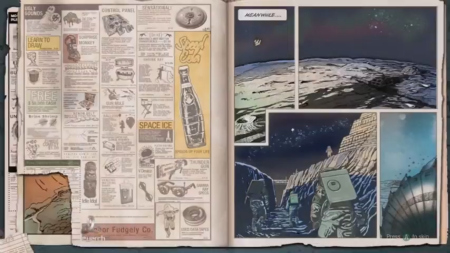 Wait, what the hell was that? It’s a space guy… Wait, it’s someone on my friends list. Huh? Yes, Moon will throw a space man at you appearing as one of your friends, and they are not as strong as the average zombie, but stronger and slower. Once dead, they will explode (be careful!) and take out many zombies if you can manager to keep them in a group. After making my way through what I believe was three doors and through round 8 (I like to have ample points when first exploring a new map), I found my way back to where I started; right inside building 11. In here, there is a power supply which allows you to power the buildings. Once round 10 started, I noticed another space man, leading me to believe that they will spawn continuously if killed. This time, tough, he got a hold of me, and when he did he damages you to the brink of death and teleports you back to the main room (let’s call this the Command Room). I can see this being quite useful. 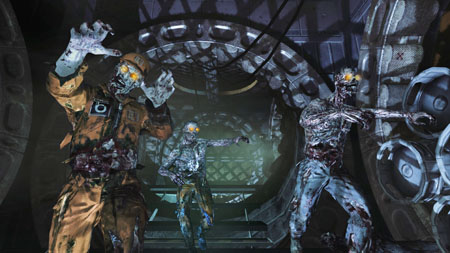 You see, when you teleport you will be spawning zombies around you current area, so there wont be a lot in the Command Room, though there could be a few, making this a great way to possibly escape if you can manage to get the space man to hug you without being hurt by any of the other Zombies.

After this, I couldn’t help but remember the Pack-a-Punch machine that is in the starting area. Obviously I cannot use it when I start (needing 5000 points), so how do I get back to it. I had turned the power on and I could use the power-ups and such, so I made my way to where I remember there being a Stamin-Up (a key power-up) and grabbed it for 3000 points, though I could not find a way to teleport back. By this time, it was round 15, and I was far to concerned with exploring the map and not defending myself, so I quickly died even though I had though I had made the last Zombie into a Crawler using a grenade. That was not the case, and I was taken out by three straggling Zombies. 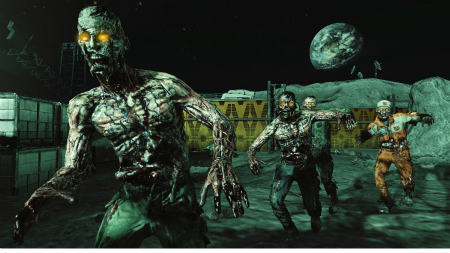 My first few play-throughs of this map were great, and I am really looking forward to continuing to play it some more. I would love to play with some of the Xbox Freedom community, so make sure you guys and gals send a friend request to Killer Penguinz (don’t forget the space!) and include a message saying that you want to play some Zombies! I cannot wait to get the Mule Kick Perk and check out the Wave Gun and Quantum Entanglement Device (QED), so hop on and play some Zombies with me! Make sure you enjoy this map pack too, as this is supposedly the last map pack for Zombies (maybe we’ll still see once more for multiplayer?). If that’s not your thing, maybe you’ll just want to read about Why DRM is Good for Business and Will the Ever Classic FPS Ever Grow Old?