Deus Ex: Human Revolution has been on the horizon for many Gamers for quite some time, and in it’s first few days has really made quite the impression. Let’s see exactly what has drawn people in to this stunning game.

I wish there were just one that that drew me in, but sadly there wasn’t. Though really, this is a great thing, as Deus Ex really draws Gamers of all tastes in. Right off the bat, the FPS in it shines bright and true, though the player is quickly introduced to the RPG aspect, as well as the (somewhat) open world, too. This really melds well for this game, as I never once felt over-encumbered by information or what to do.

When the game starts, the player is thrown into a tutorial-like level where you must escape from a building that is being attacked. The great part is that you can actually skip the tutorial screens (though not the actual mission itself), as the tutorial is done through short videos that can be accessed when the prompt appears. At first, I didn’t really like this, but the more I play, the more appear, and I actually like the idea of being able to skip the easy ones (movement, shooting, etc.).

Once this short section is done, the player really has an amazing sense of what the game is going to look like and feel like, though I don’t think I could have ever anticipated what the game would play like. From that first mission I assumed there was going to be a lot of shooting and killing, though I was wrong. In fact, the player is given the option of what they want to do (the “stealthy” or “kill-’em-all” routes) and given an appropriate weapon based on this. I chose to go stealthy, and then proceeded to choose the Tranquilizer Gun over the Stun Gun. After playing for only about 20 more minutes, though, I quickly learned that I probably wasn’t going to be needing any gun that much at all.

When I started my first mission, I really felt like I was playing a classing Splinter Cell game. This kind of gameplay has always attracted me, as I am someone who loves to try and be stealthy about my approach. What I loved, though, was the ability to shoot everyone if I chose to do so. I must admit, though, I am going for the Pacifist achievement, which requires you to “Complete Deus Ex: Human Revolution without anyone dying by your hand. (Boss fights don’t count.)” The boss fights are just one more thing that spices up the gameplay.

The first Boss Battle is against Lawrence Barrett, an elite member of a secret mercenary hit squad that is also known as
“The Bull”. Playing a game without trying to kill anyone is a lot of fun and challenge, and a boss battle is just what one needs to keep interest and test out all those weapons you have picked up! While he is not incredibly difficult, he does do a lot of damage with his ever-firing gun and double grenade throws, but with a stockpile of medicine and ammo, he isn’t that difficult. The inventory, though, is somewhere where I become frustrated. 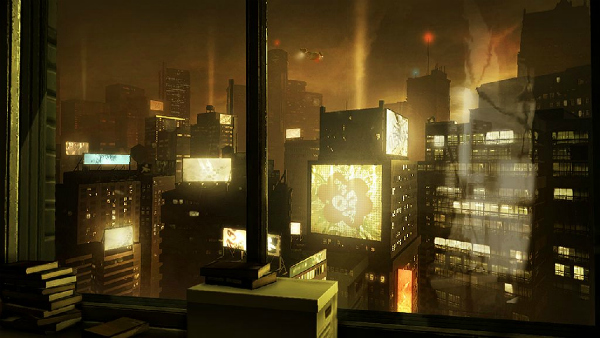 Deus Ex limits the amount of things that a player can carry (naturally), but I feel that it is almost too limited. Maybe it was just my gun hoarding wants, but I felt that I didn’t have enough room. Of course, I was carrying 4 weapons plus ammo and medicines, but nonetheless, I wanted to be able to carry the Shotgun, Rocket Launcher, and Assault Rifle! Thankfully, one can upgrade their inventory space through the vendor, and this is great. Not only that, but through the vendor the player can also purchase their augmentation upgrades, allowing you to have more augments (naturally). This is awesome, because if you do choose to play the game in a stealthy way, you really won’t need to spend your exp on anything else but these augments. The augments allow you to increase certain skills (like hacking or stealth abilities) and even give your more options for you gameplay (such as lifting a heavy object to find another off-track path). 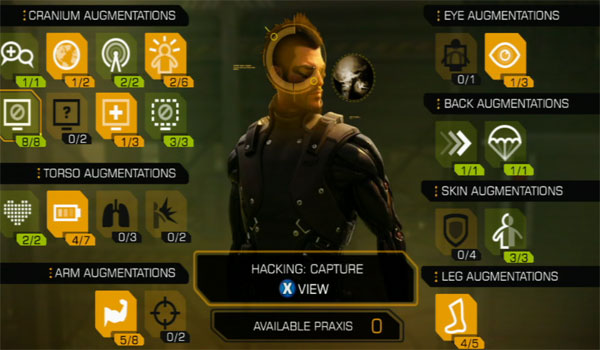 Deus Ex: Human Revolution delivers on almost all fronts. Visually it is absolutely beautiful. The cinematics stick out so well and not only look great, but sound great. Combine that with involving gameplay that sucks the player in, the ability to choose on so many different levels (i.e. where to go, what to level, how to play), and you attract more than just one group of players. The AI in the game are smart (maybe a little dull sometimes) and provide quite the challenge. This game will provide multiple playthroughs for those who seek them, as this is a game that can not only end differently every time, but also play different every time. I highly recommend this game to any who enjoy a challenge, a good story, stealth, or shooters. You won’t regret it.

If that’s not your thing, maybe you would enjoy reading about Why DRM is Good for Business or Will the Ever Classic FPS Ever Grow Old?