Most Xbox 360 mods are a merger of complexity with intriguing design to give rise to some really awesome effects like the All Spark Xbox Mod ; however this Halo 3 Xbox 360 mod by whiz tallerkamino manages to achieve that same awe inspiring visual effect by not looking too complex whatsoever. 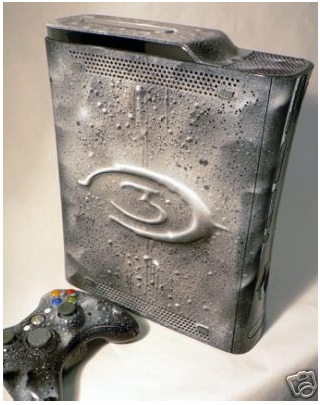 The mod itself looks like something right out off the Master Chief’s backpack and hence it would be no surprise that it appears to have been tossed about a bit. This design seems to be the work of an painter(and a really skilled one too) as it relies heavily on painting skills rather that the overdone molding work one sees a lot among Xbox mods. The airbrush work on this piece is top of the line and is not just limited to console itself but manages to find its way onto the controllers as well which is what makes this mod stand out. The focal point of it though is that it retains the basic body structure thus keeping it easy to use.

All in all if you’re a Halo 3 fanatic waiting for to get a truly realistic piece of the action; this mod is your dream come true. But if your more into comics check out the Superman Xbox mod.