Final Fantasy XIII released in the summer of 2010 across Europe and the United States. One would have thought that after a dozen titles the Final Fantasy franchisee would probably not have the same effect on gamers and fans. Final Fantasy XIII has gone on to become the fastest selling episode of the ground-breaking role playing franchisee, with over 5.5 million copies already sold since its summer release.

Created by Hironobu Sakaguchi and developed by Square Enix, the Final Fantasy series has been a revelation in the video game industry with its photo-realistic character models, full motion videos, and orchestrated music.

Millions who have played various titles of the role-playing series would readily testify that the soundtrack of the game elevates the gaming experience to a transcendental level.

The soundtrack of Final Fantasy XIII is as good, if not better, then previous titles. Composed by esteemed video game composer, Masashi Hamauzu, the soundtrack underlines and heightens critical moments in the game play.

The adrenaline-pumping Defiers of Fate sets up the tone of the game as it plays during the opening of the game when Lightning assaults the Purge train. The Warpath Home is a lilting score that plays when Nora Estheim is mortally wounded and falls to her death after saving Snow Villiers. Later, when Snow proposes to Serah, the melodious Promised Eternity makes the magical moment come alive on your screen. 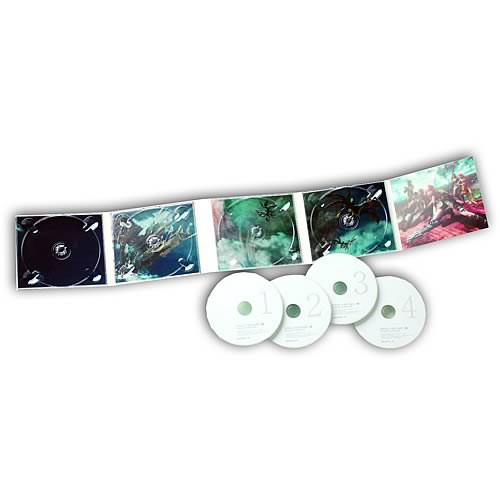 The background score has also been used to set up the characters of Final Fantasy XIII. When one listens to the heroic Snow’s Theme that plays during Snow Villiers presence, the gamer can instantly surmise the heroic attributes of the character.

There is no doubt that one of the many triumphs of Final Fantasy XIII is its musical score: A musical score so rhapsodic that listeners would love to possess it separately.

It would not be an exaggeration to say that the design and execution of the 4-disc box set matches the delicious imagery of the game itself. The case contains high-resolution graphic art featuring various scenes of the game play. Even the Cds contain high contrast panels with a white background.

The packaging and design of the Final Fantasy XIII Soundtrack 4-Disc Boxed Set will definitely tempt you to make it a part of your ‘Fantasy’ collection. You can possess one by paying $29.99.