Elder Scrolls IV: Oblivion is arguably one of the most successful games to come out on the Xbox 360, and it’s successor, Skyrim, is shaping up to be even better. What is in store for this amazing series?

From the first views of the gameplay, the environment looks astonishing. Just like the previous Elder Scrolls games, the landscape looks not only visually amazing, but also immensely large. The gameplay is done on the Xbox 36, and although the video quality itself isn’t the best, Director Todd Howard goes to great lengths to talk of all the visual improvements they have made, down to the micro level. He describes it as, “a huge, epic, fantasy game where you can be who you want, and do whatever you want.” Of course, there is the familiar system of mechanics for the game, also allowing users to duel wield one-handed weapons and individually swing them, as well as “duel-wielding” spells. 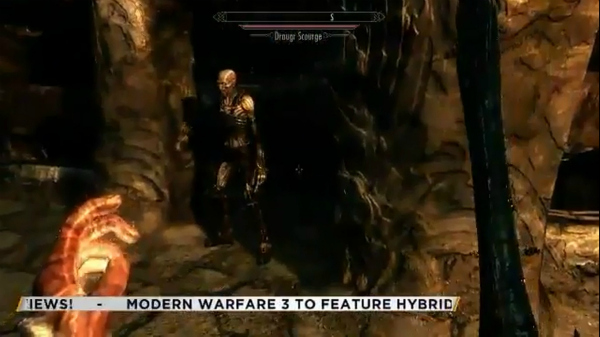 When the gameplay moves high up onto the mountain, the game really shows off it’s amazing differentiating environments, showcasing one of over 150 different dungeons in Skyrim that players can visit. This is  an astonishing number to this of, as one has to keep in mind that these were all created from scratch and by the developing team. That simply amazes me. In the cave, the player showcases some of the “shout spells” that the game will use. Acquiring these will require players to defeat the all powerful dragons that the game throws at players throughout the game.  On the question of gameplay time being over 300 hours, Howard said “there is at least 300 hours, we kinda stopped counting.” Needless too say, this game will provide endless amount of playing. 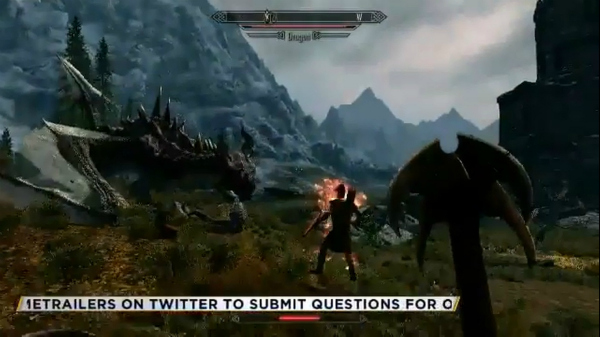 The gameplay then goes on to show off the brand new engine that was made in order to create the creatures and characters in the game. These Mammoths look amazing! The biggest part though was the showcasing of the dragon fights, which they call the “Big boss fights.” These dragons looks absolutely bad ass, and I for one cannot wait to fight one. The fight really seemed heavy on the magic of the player though, as there wasn’t much hand-to-hand combat until the dragon is “downed,” and I am hoping that the dragons can be taken down by other means as well, say maybe bows or some other sort of ranged devices. I really cannot wait to get my hands on this game, and am eagerly awaiting more gameplay videos, as I’m sure you are as well. Check out the whole video below!

You might also like the New Tomb Raider Trailer and Spike TV to offer Exclusive Streaming of E3!