DC Comics, as we all know is an establishment that many generations have come to venerate. So much so that there are several fan clubs all across the world dedicated to the characters of DC Universe. Popculturegeek has uploaded a cool new pic of the DC heroes Xbox 360 Case Mod. You could see all your favourite characters on the side of the Xbox, and that is pretty much about it. 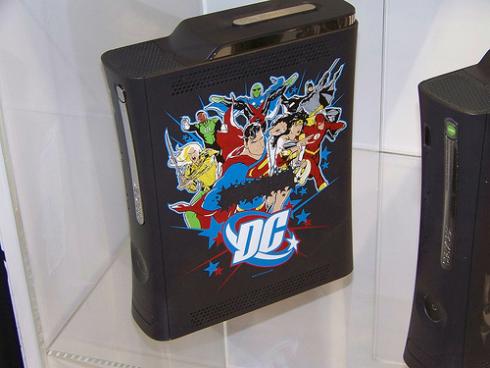 Modders could do much more than just sticking up pictures of DC Universe characters on the sides of a console. Perhaps, they could have made the case a little cooler with some sort of DC embellishment in order to remind us of one of those cool characters. Some LED lights could have helped too. However, I have no complaints and I must say it is a pretty cool case mod and certainly cooler than what it would have looked like if it were just unboxed newly.

If the Case Mod came with some accessories even, it would have been awesome. Perhaps DC fans would always expect more from mods and memorabilia than the rest of the gamers. If you are a fan of blood and gore, you should check out the Mortal Kombat Vs. DC Universe Fatalities Moves and decide for yourself which ones are better and which ones are weaker. However, the DC Comics Case Mod is pretty cool too and it brings back memories.