Xbox 360 mods are considered to be cool because because of their contemporary look like the chrome xbox mod and radical designs like the ‘All Spark’ xbox Mod and this xbox mod is no different. 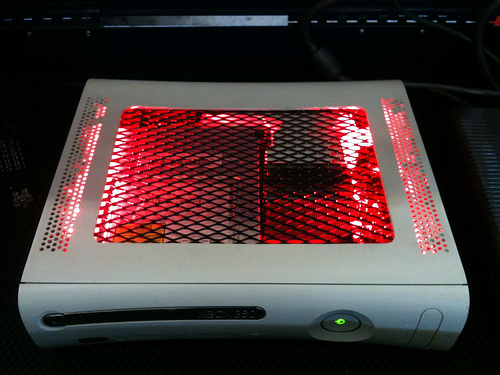 The red neon look with may not exactly be the most radical look out there but definitely is one which doesn’t get boring. None the less it this Xbox 360 mod from deacojoh very closely resembles a grill which makes my mouth water ( because the first thing that it brings to mind is a  steak). Coming back to the looks the meshed body case gives one a peek at the insides of the console which never disappoints; and to add to it glowing red neons give the mod a sizzling red look of burning coal. Though attractive the look could have made more of an impact if it had a little more ( as in a red backlit power button).

All in all this mod is pretty cool and keeps it simple but eye-catching; another Xbox 360 mod with cool lighting would be the black LED xbox 360 mod.