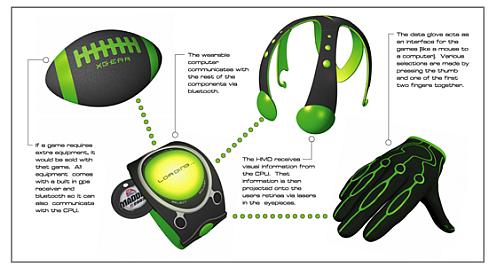 If the game you are playing requires that you need the whole equipment, it would be sold along with that particular game. Moreover, the X-Gear comes with a built in GPS receiver and Bluetooth and it can also communicate with your CPU wherever you are. With the help of the Bluetooth, the wearable computer communicates with the rest of the components of the X-Gear system.

The X-Gear system consists of a visual information receiver which projects that visual information to the wearer’s retina with the help of lasers. The glove acts as an interface with which the user can control the game, by twisting and turning fingers. The head gear also consists of earphones which are made of high quality materials. There are various other components which make up the entire X-Gear system and you could buy them depending on the type of games you want to play.

It is not clear if the product is available in the market but you could definitely contact Kate for more information. Sometimes you just might want to get yourself a good old Xbox mod which isn’t too futuristic and intimidating. If that is the case, you could go and get yourself one of the many mods we have written about. The Bizarre Red Xbox Mod, the Black LED Xbox Mod, and the Benheck Xbox Laptop Mod are worth mentioning about.