The Elder Scrolls V: Skyrim is in contention for the most anticipated game of the year, there is no doubt about that. While we have to wait another thirty days for this amazing looking game, some leaks have arisen, including a high-resolution map and the actual game manual!

The entire series of Elder Scrolls games has always been deep, intuitive, and very well planned. A map is a very handy thing for a game like this, especially when one is planning their next great adventure, seeking out precious weapons and armor, or just looking for the next great thing to add to their wall of game memorabilia. Recently, a 1600×1175 version of the Skyrim map has surfaced, and it is a awesome sight as well. You can click here to see the high resolution version of this map, and also check it out below! 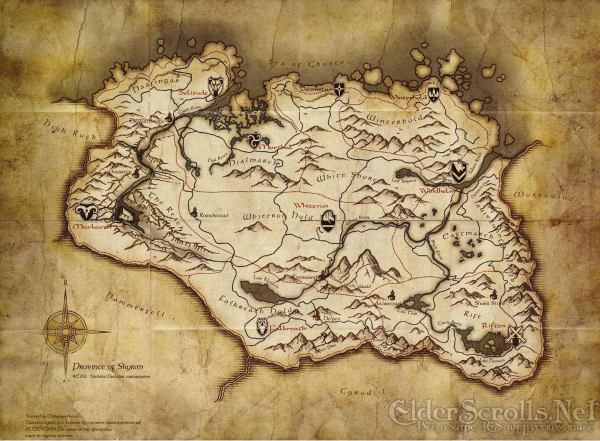 The map has some creases in it, lending to the idea that this is the actual map that is packaged with the game (just like the last in the series, Oblivion, was packaged with a map). This is not, though, the cloth version of the map that pre-orders will be receiving. It’s awesome to see the amount of detail available in this map, from the mountains, rivers, and what are (most likely) the major routes through the lands (indicated by the dotted, red lines and black, solid lines). The symbols of the different tribes/houses (if you will) are also a great cosmetic addition, and one can only hope that these distinctions on the map are equally distinct in the actual game, which I’m sure is the case.

Along with the map leak is the leaking of the games official manual; 38 images of the pages of the manual, including the obvious game mechanics, and also the bit of lore that every Elder Scrolls game seems to deliver. You can view the album in it’s entirety here.

Hopefully the time between now and when the game comes out is a short wait, but until then you might like to see our exclusive article, 40 Minutes of Leaked Skyrim Footage!