Much has been said about this amazing upcoming game, and while we all knew a Collectors Edition would come, we never knew when! Let’s take a look at what’s inside this awesome bundle!

Big title games almost always like to put out special editions of their games, sometimes even more than one version of it. The Elder Scrolls certainly did not skimp on this on either. 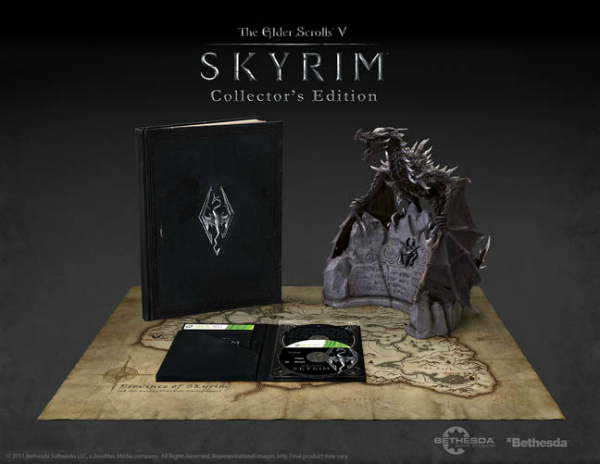 The bundle will cost a whopping $150 with a $25 initial deposit required to reserve it (depending on where you shop). Inside the bundle, players will find not only the game (in what appears to be a special game case), but also the making of DVD for the game as well. The big attraction, though, is the 12-inch, PVC statue of Alduin, the World Eater. The awesome stuatue was created using the games 3D files, and the release notes mention that the statue aims to “teach the player the lethal language of dragons.” Also included is an awesome 200-page coffee table-style art book detailing the entire game’s creation, and also containing a forward by Tom Howard. Lastly, players will also receive the cloth map of Skyrim that you get for pre-ordering either the standard of the collectors edition. This is a must have for all Elder Scrolls fans, but hurry to get it quick! There are extremely limited quantities of this package, so make sure to go get yours ASAP!

For more on Skyrim, check out The Elder Scrolls Lore – Pt. 1 – Skyrim!