A 40 minute video demo of The Elder Scrolls V: Skyrim was recently leaked onto the internet. Let’s take a look at what this amazing video holds.

Unfortunately my friends, the video (taken by a camcorder from the perspective of someone in the audience) has been uploaded and taken down more than ten times in only an hour of debuting (see end of post for video link). Have no fear though; images will accompany this written transcript of events of the unveiling at QuakeCon 2011. 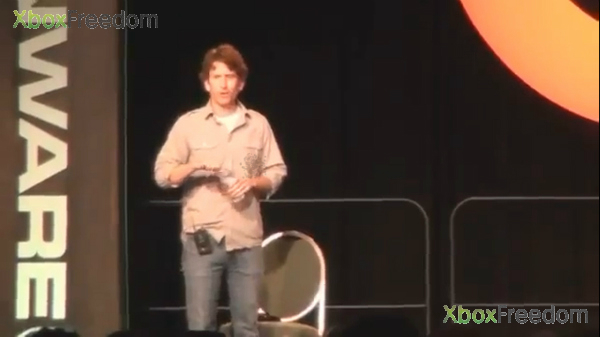 The video starts with a small introduction that asks for the audience to please put away all cameras and camcorders. After a somber “Awww,” the audience quiets and an introduction for Tom Howard is given. After Howard makes a few remarks, sits down and picks up his controller, the logo for Skyrim is shown on the screen; a black backdrop with the ever-shiny dragon crest.

Howard begins his journey, showing the audience a few saves featuring total save times of 36 hours, 18, 10, and 3. After announcing that the gameplay will be on the Xbox 360, he kicks off the journey with the title of the save being “Prisoner, Nord, Level 36.” Even though this is the save he selects to load, the loading screen still shows a “Level 1” in the upper right corner next to the loading bar. 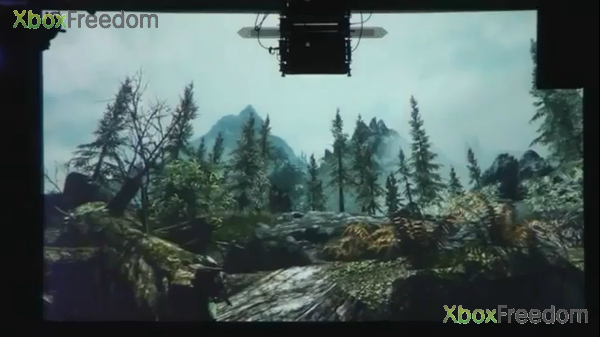 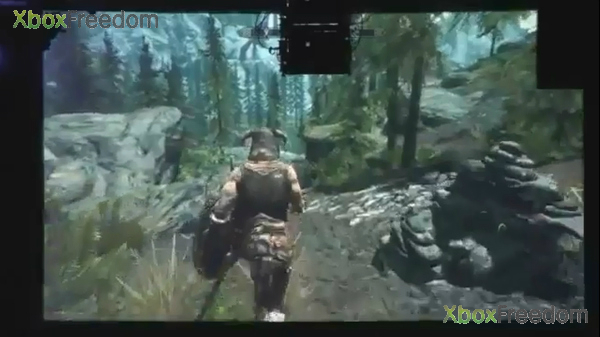 “It is a game where you can create any kind of character you want, and go do what you want,” Howard says as he opens up into the world. Cheers and applause fill the audience as the screen unveils the glory of this game. He mentions the complete reworking of graphics and gameplay for the game, and I must say that even in the not-so-good-quality of the sneaky camcorder the game looked absolutely stunning. The trees, mountains, ridges and hills all looked wonderful.  With all the vegetation the world looked so alive, plants looking so alive with what Howard calls “Micro detail.” 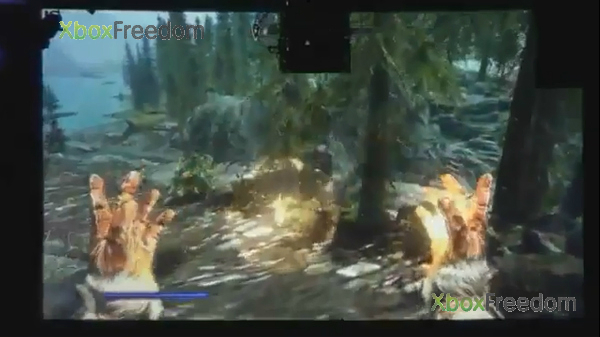 On the first showing of the Nordic character, the player looks amazing in the third person view. Big and brawn, the character screams (at least to me) what a Nord should look like with the horned Helmet, shield, and sword. The movement of the character looked incredibly fluid, really adding to the realism of the game! With a few sword slashes, the crowd was roaring for Howard to slay the wild pigs nearby, to no avail though. After, a small scrolling-wheel appears offering what appears to be a mix of spells, moves, and items. I’m assuming this is Bethesda’s attempt at a “quick inventory” to assign items, spells, etc. to each individual hand, and it actually looks quite well! The game does not even seem to clutter it with the minuscule bars that show health, magicka and stamina like in Oblivion, but rather only seem to appear when needed or used. Howard then shows the audience how to combine a spell, creating a much more powerful version of the healing spell he had been using. 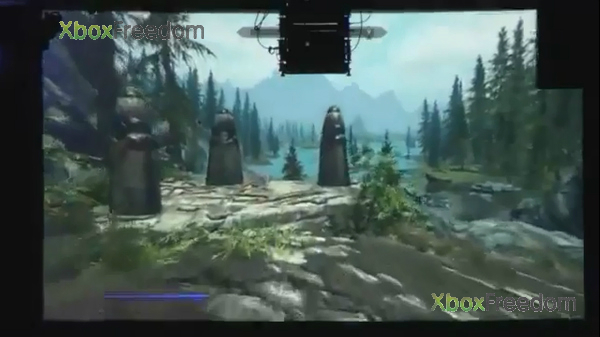 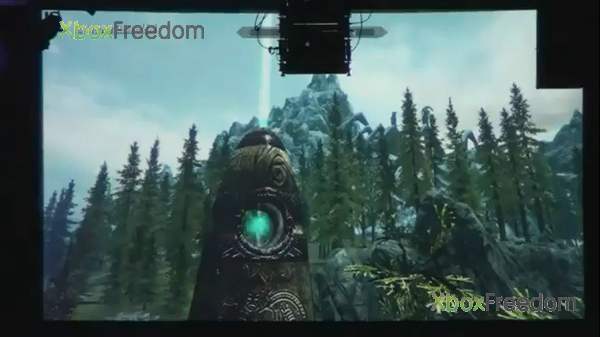 Next, he approaches three of what are known as the Guardian Stones. These stones have the ability to grant the player abilities based on their selection. The three shown were the Thief Stone, Mage stone, and Warrior stone. Each stone features a very creative design on each to signify what they grant, and Howard notes that the player can only have one of these active at a time. He activates the Warrior stone and an awesome light show appears, showing off not only a beam of light but a star constellation on the stone as well.  After this, a wild wolf is spotted, and the crowd goes crazy again to see some action! 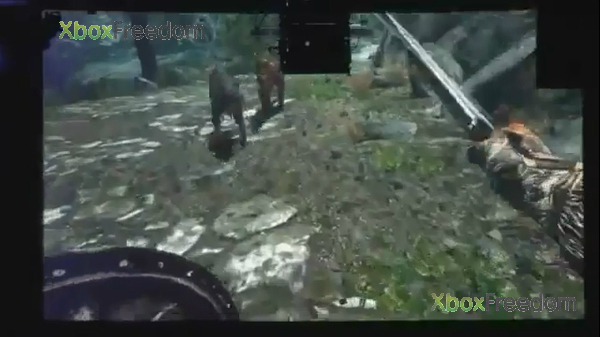 After equipping his shield and sword, he dives into battle and mercilessly slays the mighty wolf and boar, showcasing an AWESOME finishing move! Ok, it wasn’t that impressive (mainly because it was a wolf and hog), but it really satisfied everyone in attendance. With a blood-stained sword, Howard moves onto the next beautiful area. This time, he heads for the water. 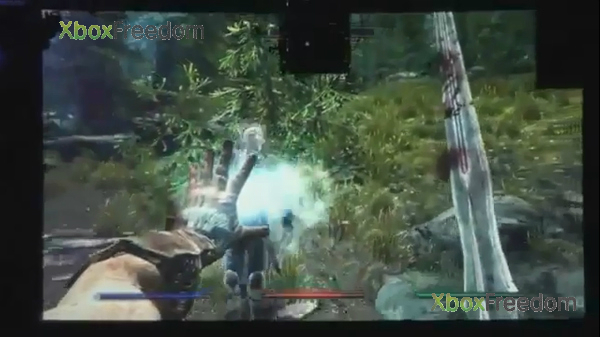 The crowd chants “Water, water , water!” and Howard obeys. The water looked incredible (again, even on this mere camcorder). The rushing water, rapids, and ripples all looked stunning. Such a beautiful game. But what’s this!? A wild thief!  Howard rushes at the Archer bearing shield and sword, and as he switches to his “Frostbite” spell, the game pauses as he makes his selection, and he uses a spray of ice to freeze the lad before extinguishing his life with a sword to the jugular! After the excitement wears off, we move on to the interface. 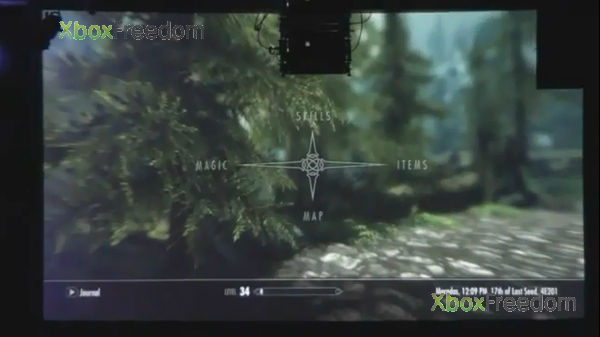 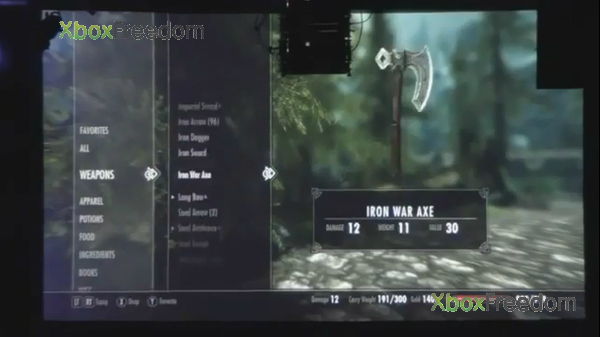 “In an RPG, you spend a lot of time looking at stuff, and we’re really excited about this,” Howard says. The interface looks spectacular, really focusing in on finding the item you want, even allowing for favorites! Players can also zoom in on an item and really check them out as they all have clearly been carefully designed to look so artistic and useful. He also shows off one of the Notes from the game, a note featuring a Black Hand with the words “We Know” underneath. 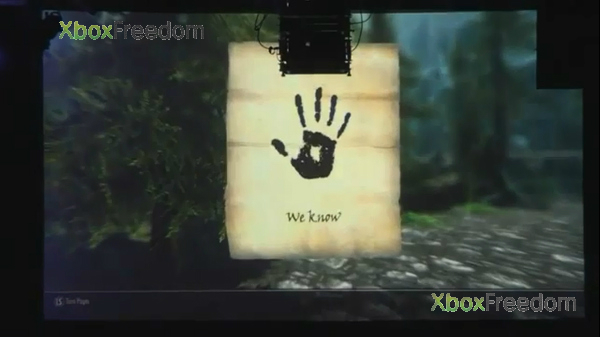 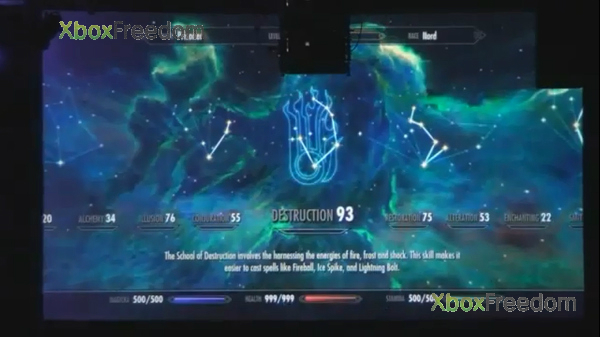 At this point, Howard confirms that the Dark Brotherhood is indeed making a return in Skyrim. Showing off the Skills screen, Howard notes that “looking to the Heavens” is how one will track their progress in their skills, and just like in Oblivion, the more you do something, the more it will level. These skills also act as perks, and each perk has its own perk tree, allowing players to specialize in certain fields with each increase in level! 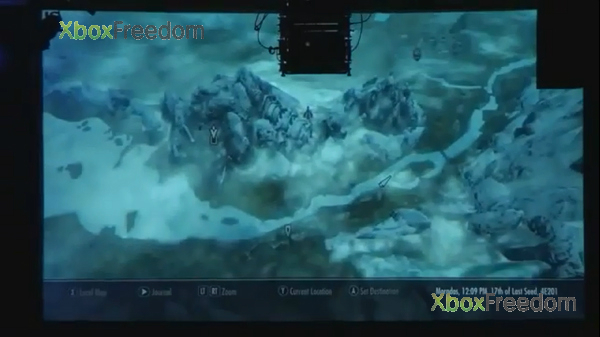 Next was showing the map, and when Howard scrolls out, it was amazing; the map is actually a 3D view of the world, showing not only where the player is, but also where everything else is! He assures everyone that it is also “the biggest and craziest game we have ever made.” He explains that although the map is close to Oblivion size, there is significantly more content to partake in. 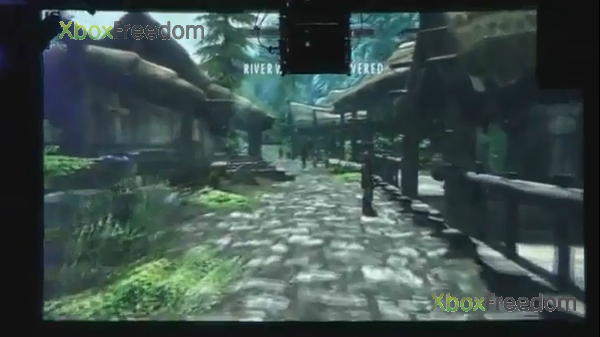 Walking into his first town, the town looks astonishing alive and well. The attention to detail is phenomenal, and the town looks stunning. He walks into a forge where he can improve and repair his weapons, and also shows off some of the “jobs” that players can do to make money. These jobs are quite simple and mundane, such as cutting wood and harvesting food, though an easy way to earn money. 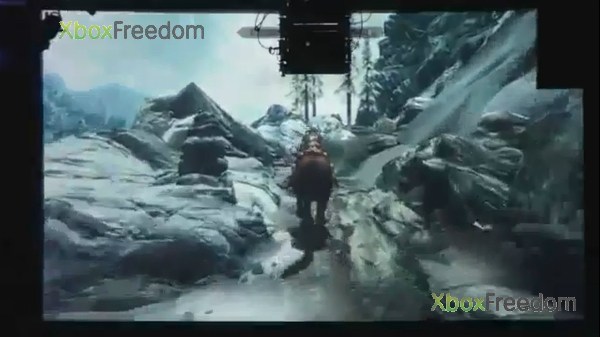 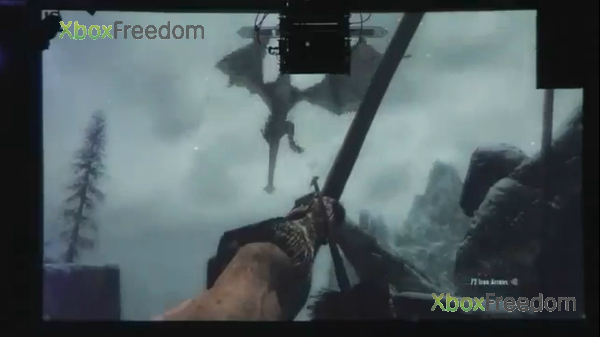 Getting on his horse, the movement looks so smooth and streamline. Howard then explains the dynamic questing and weather, allowing not only for quests and quest lines to change based on your decisions, but the weather can change as well and make surroundings look different. He notes that the artists don’t texture the rocks to look one way, they are dynamically altered. After this, he makes two enemies fight each other using a “Frenzy” spell, and the proceeds to use his bow and arrow to mercilessly kill-off the other. He then moves to a ruin where Nords would worship Dragons, something that has not been done for thousands of years. As the first Dragon swoops past the player, more applause and cheer fills the room. After attempting to battle the mighty Dragon, Howard shuffles inside for cover.

Entering the building, cries of a Dragon are heard as he sneaks up to stealthily take out two men with his trusty bow and arrow. Looting everything, he proceeds to find a glass sword and begins to duel wield.

After venturing further into the cave and fighting a spider, a prisoner is released from a knot of web, though he hastily runs away only to be chased by the player until his… untimely death. For a while, Howard continues to show more of the gameplay and action in the game, and unfortunately it appears to be the same footage that has been shown before of fighting the Giants and the Dragon. While entertaining, it offers nothing new. 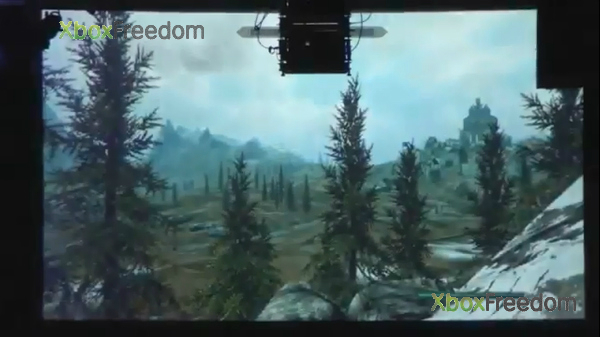 Overall the demo was amazing. This really gives insight as to what we can expect for this amazing game, and hopefully the video can stay up long enough for everyone to enjoy! If not, I hope my annotation has sufficed (along with the low-quality images, sorry about that again). If the video has managed not to be taken down, please enjoy the whole thing below!