A new peripheral for the Xbox 360 called the SplitFish FragFX Shark 360 guarantees to take your FPS gaming to the next level with precision. 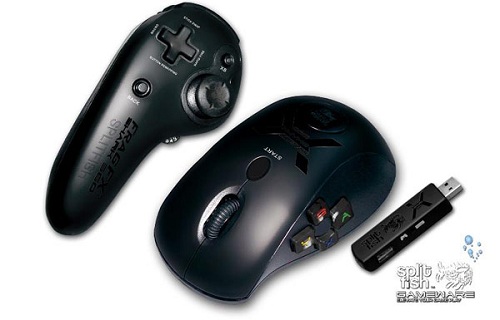 The FragFX, formerly exclusive for the PS3, is a wireless “hybrib controler”. It combines what looks like your usual optical mouse with a curious remote-looking gamepad. Across the two accessories, all the Xbox 360’s buttons are available, with the main mouse buttons replacing the triggers on the normal controller.

All the letter buttons are placed below the thumb of your hand on the mouse, while the joystick and directional pad are on the left hand remote.

It’s setup feels similar to that of a pc geared towards gaming, minus the bulkiness of the keyboard. Though the mouse pad itself is quite large, but at least it is reinforced, so theoretically you can play this on the couch. Though a smooth surface underneath would probably suit it better.

It’s obvious that this kind of controller setup is designed first and foremost for FPS games, notably Call of Duty and the like, where precision shooting is key, as are twich reflex skills. Platformers on the other hand would probably be better off with the standard control, since the letter buttons are slightly less accessible on the FragFx.

According to one source, the FragFX worked wonders when playing Left 4 Dead and Dead Island thanks to a quicker response time. Expect to see a boost in your overall performance in titles like this.

In other accessories related news, be sure to check out this Awesome Xbox 360 Steampunk controller, and it never hurts to take a look at our Top 10 Zombie Games on Xbox 360 list, unless of course you get bit by the undead.