Sharpen Your Music Skills by Playing the Kinect Air Guitar

To play the air guitar has been many wannabe-musicians’ way to get noticed and charm people. This time around, a nerdy musician has created an amazing Kinect Air Guitar using Microsoft Kinect and a few other programs. Chris O’Shea used c++m openFrameworks and openCV with Microsoft Kinect and got a few drivers to detect the player while playing the Air Guitar. 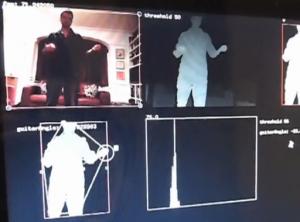 The results may not be perfect but it is still at a conceptual level. With a little work and effort from O’Shea or other programmers, the Kinect Air Guitar could even be used as a Guitar Hero Controller, without even having a tangible controller around.

You could also take a look at the Metallica Guitar Hero Faceplate which would make you remember all the great tunes by this amazing metal band. If you are not really into Metallica, you could choose to chill out by choosing the Van Halen Guitar Hero which comes with dozens of hits. If you have the time and knowledge, you could try and ameliorate the Kinect Air Guitar by using some programming and hacking skills.

Via: Walyou Via: Gadget Venue