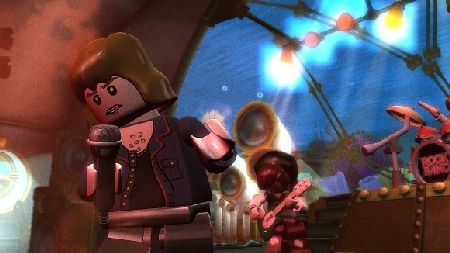 Most parents often get worked up when their children are exposed to rock music at an early age. The rationale behind this is being the misconception that rock music teaches evil. It is rather difficult for these parents (worry worty) to obliterate this misconception from their minds. Come this holiday season and, you parents will in fact be tempted to buy “LEGO Rock Band” for your children, which will be released on all the consoles like PS3, 360, Wii and DS.

The “LEGO” tag perhaps will sell well and also will ward off fear of corrupting your children’s minds by rock music. Apparently, the game is being developed by TT Games and Harmonix at the moment. It will use all the existing Rock Band and Guitar Hero peripherals. The game is family friendly and the family-focused version of the game allows you to customize your “minifigure avatars” along with your road crew and managers.

Although there is no news disclosed yet with regard to kid-friendly song list, it is quite interesting to see the final list. The LEGO Rock Band will come with your favorite rock bands such as, Blur, Carl Douglas, Europe, Good Charlotte and Pink as well. So get ready for the rockers to rock you with this amazing game!