Kim Swift, one of the people behind Portal, recently announced and showcased a new project, Quantum Conundrum, coming out for Xbox 360, PS3 and PC. 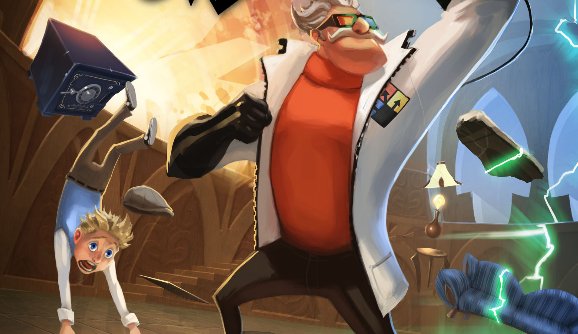 Quantum Conundrum has a similar gameplay to that of Portal, puzzle solving in first-person view, but with a key change in the game mechanic: Instead of having a portal gun to help the protagonist, this time around players will be in control of a little boy who uses a device to switch between dimensions.

In the game, players get to control a boy who is visiting his eccentric, inventor uncle.  His uncle gets lost inside the house, and now it’s the kid’s job to find where he is, switching between dimensions to pass the many obstacles that show up throughout the different maps. Some of the dimensions (five, all in all), include one where everything is light, and can be lifted, one where there’s no gravity, or one where everything moves in slow motion.

At first, some gamers feared that the game might be just a kiddy version of Portal (just replace GLaDOS with uncles, and mess up the proportions!!) but the game’s core mechanics have proven to be particularly special and unique, while the humor witty and fresh on its own on some of the demos shown. Particularly, the demo from PAX got a lot of attention for explaining a lot about what the game will play like, while also showcasing some dimensions with real in-footage game.

All in all, the upcoming Quantum Conundrum should have players excited with its unique core mechanics, beautiful aesthetic, and weird physics that players will need to learn to control in order to beat it.

To read more about up-to-date events in the Xbox world, check “Microsoft Asks: Do we Even Need to Build a Better Xbox?” and “Call of Duty: Elite price Revealed: $49.99 per Year“