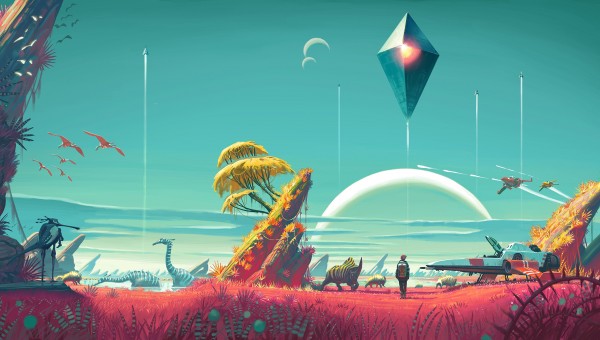 No Man’s Sky by Hello Games is a combination of open world space exploration with adventure and survival, but it’s most compelling trait is the number of worlds a player can visit, with the number rumored to be 18 quintillion (1.8×1019) planets with unique attributes, and each player having his/hers own experience and order of exploration.

Through the exploration, players will gain information about the planets that they can submit to The Atlas, a universal database that can be shared with other players of the game. They gain materials and blueprints to upgrade equipment and their ships, which helps them go deeper and deeper towards the center of the galaxy, on the way encountering friendly or hostile NPC factions in what should be a new and unique shared universe experience.

The plan initially was to launch the game just for the PlayStation 4, but then it expanded to the PC, and now it seems like Hello Games are working on making it for the Xbox One as well. These plans (which we are obviously happy about – the more consoles the better) are pushing the release date even further back. The latest estimates were June 2016, but now it’s probably going to be in the final quarter of 2016 at best.

Since the game was first announced and glimpses of it revealed at Spike VGX 2013, it’s been tabbed as the biggest original game release of 2016, and last year’s short peak at the title created even more hype and anticipation for the release. But as it often happens with video games, especially ones that declare themselves to be bigger, better and more ambitious than anything we’ve ever seen before, the time they’re actually released in has nothing to do with the original announcements.

No Man’s Sky is only the third game by British video game developer Hello Games, with their previous two being under the Joe Danger title.