The new Metallica Guitar Hero will be launching on the 22nd of May (29th in the UK) and will offer a buncle for the major Heavy Metal fans. 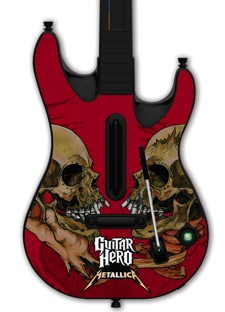 The new Metallica Guitar Hero is the highly anticipated Xbox 360 Guitar Hero game which will feature many great tracks of the popular Metallica. In addition, the graphics will include the frequent visits from the current band members to accompany you throughout your daily Garage Days with Metallica.

Once the new Xbox 360 title will be released, a bundle will be offered for die-hard fans which includes the Guitar Hero Metallica game, a wireless guitar hero controller, and a beautiful new faceplate that reminds me of the Sad But True images.