When Portal, a fine mixture of puzzle and FPS, came out as an added bonus for the Orange Box package, no one expected it’d turn out to be the phenomenon it was. Sure, we get good games every year, or every other month, but hardly ever a game gets inside popular culture and in conversations the way Portal did. Portal became the source of memes, people talked about it and it seemed the whole Internet couldn’t get enough of it. Chell and GLaDOS, protagonist and antagonist of the game respectively, became icons on their own and players around the world wanted to know more about them. Understanding the importance of the first game is essential when discussing Portal 2.

When Valve announced Portal 2, the Internet again rejoiced: the beloved characters would be back, we’d all get more puzzles, more witty dialog via GLaDOS, and… what else? This question, the “what else?” is what proved why the guys at Valve are geniuses at what they do: they understood, from day one, that you can’t just recreate Portal, make a couple new puzzles, throw in some packaging and expect the Internet to go crazy again just like that.

For starters, one thing is forever lost: you already know GLaDOS and Chell. You know the cake is a lie. Knowing them was part of the Portal experience, that was the game at its core. Valve knows they can’t expect the player to go back to that dynamic, so the cold, sterile lab environment of the first game has been completely changed and rearranged to be coherent with the events on which the first game ended: this time around, the environments are varied, changing, and convey in a great way how big and scary the Aperture science labs (where the action takes place) really are.

The humor in the first game came from how unsettling the situation was: the player ended trying to defy the AI GLaDOS at every given opportunity, and this is where the game got its meat: the player would be punished both for following the rules, or going against them, all the while GLaDOS threw insults at him/her, like a looming presence in the distance, checking everything that’s going on at the labs. It was scary, yet brilliant. On Portal 2, when the same situation arises, it doesn’t last long: the humor of the game is also forever changed and some parts, instead of playing like a really unsettling sci-fi movie, play like one Pixar’s greatest productions. Let it be noted, this is in no way something bad, and is a testament of how clever the writing is. Valve did the right thing not trying to recreate the Portal 1 experience: instead, they really made the story move forward. 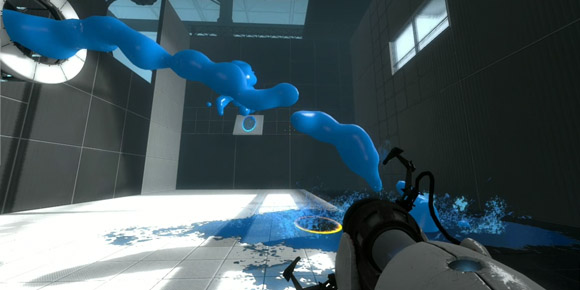 One of the new addition to the core mechanics, the repulsion gel

The single player mode, albeit slightly longer than Portal 1, doesn’t include as of now advanced chambers, so the game is significantly easier in terms of sheer difficulty. The same core mechanics are still there, and using portals and thinking with portals feels as natural as ever, maybe even more this time around, thanks to the graphical improvements. More experienced players will probably breeze through the game in a couple hours, and await for the imminent DLC (Valve already announced the first pack will be free). There are a few new additions which make the player have to rely on more than just portals to solve the puzzles, namely the gels, each one with a different purpose: the propulsion gel, which makes the player move faster when sprayed on certain surfaces, repulsion gel, which makes the player bounce on it, and conversion gel, which allows to make portals on surfaces where it’s not usually possible to do so. Although this is at times gimmicky, the variety is welcome and gives the game its own thing to differentiate it from the first entry of the series.

The other interesting aspect is that Portal 2, besides the single player mode, has a cooperative mode. On this mode, two players will control the robots seen sometimes throughout the game, and will have to solve a different set of puzzles, again guided by GLaDOS. These puzzles are all harder and more creative than anything seen on the single player mode, as the Valve guys could try out a bunch of new things being that there are 4 portals available instead of just two. Besides, all of us like yelling at our best friends when they screw up. 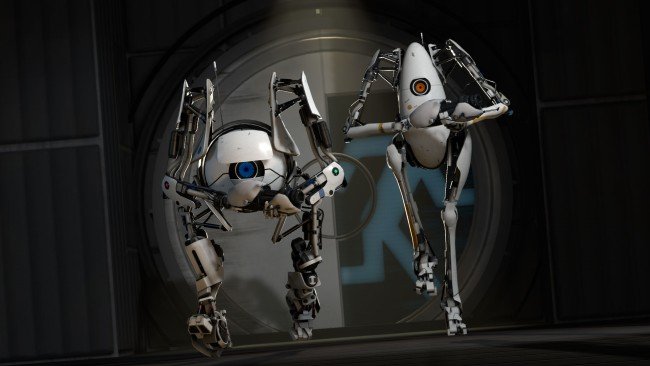 In the end, Portal 2 is a different experience from its predecessor, in terms of mood, humor and the way things play out. Portal was great, a masterpiece, but recreating the same game now is impossible: the player already knows too much. And that is why evolving, and making it such a different beast is a great thing. The core mechanics are as solid and fun as ever, and the new additions, a breath of fresh air. Portal 2 succeeds both in how it follows an builds on the strengths of its parent, and on its merits as a distinct and interesting game in its own right. We could say… this was a triumph.