In anticipation of the retail release of Gears of War 3, Microsoft has announced an exclusive Gears 3 Xbox Live Gold subscription that comes with a few extra goodies. 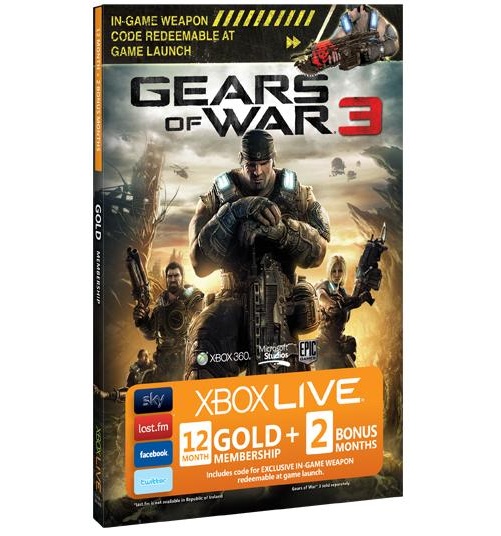 According to sources, Microsoft will be releasing a very limited number of these subscription cards to retailers. These subscruption cards should be available just before the launch of Gears of War 3, which to me sounds like the perfect time to juice up your membership for another year.

Much like previous exclusive subscription cards, such as Halo 3 and Forza Motorsport 3, this 12 month subscription comes with two bonus months of paid Gold membership for free. Also it will include some exclusive Avatar items, dashboard themes and the other standard range of goodies.

What separates this subscription card from the others though is that it comes bundled with an exclusive in-game weapon. There’s no confirmation yet as to what the weapon will be (judging by the picture, we’re guessing it will be some sort of special Lancer Assault Rifle) and there are no details as to which modes the weapon will be available for use in (perhaps all of them).

In all, this looks like it should nicely round out the whole hurricane of goodies and extras that have been annouced and released for Gears of War .

In other news, be sure to read Deus Ex: Human Revolution – Upcoming DLC and Call of Duty Elite Price Revealed.