Gaming Rumors – No Man’s Sky, Not Surprising Anyone, is Delayed Again

Want to hear something that won’t surprise you? No Man’s Sky, the ambitious exploration game by Hello Games, which is supposed to be released in June, is allegedly delayed again.

According to a number of sources across the web, from trustworthy (and less than) websites, are suggesting that it’s not going to be coming out on June 21, the current release date. On Kotaku it’s been specifically mentioned that someone working at Gamestop said they received marketing materials today for No Man’s Sky with the original June 21 release date. However, stores were informed that the release date is no longer correct and that they should cover it up with a “Coming Soon” label: 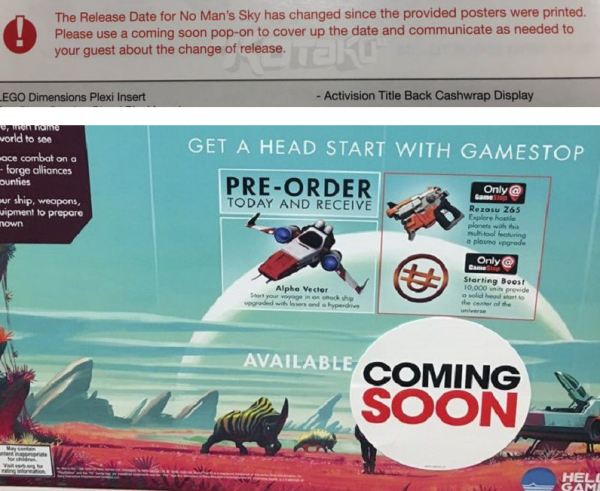 Since making a huge impression when the concept was first revealed back in 2013 and generating a lot of hype in E3 2014, there have been constant talks about how difficult it might turn out to be for a small studio like Hello Games to live up to expectations with something that sounds more ambitious, in a way, than anything ever released.

The whole idea of No Man’s Sky is about endless space exploration, although it has been a bit vague what actually happens in the game besides exploring. It seems to set itself apart by announcing that stars, planets, life forms, ecosystems, and the behaviour of the space-bound factions are all created through procedural generation using deterministic algorithms and random number generators.

If it is delayed, it’s intriguing to know if it has something to do with a problem with the gameplay or something similar, or simply the development team wanting to add one more thing for the sake of perfection.

For now, rumors is all we have to go on. If you don’t care when it’s coming out, which I know a lot of people don’t, especially those who love exploration aspects in video games, it’s available for Pre-Order on the PS4 and the PC.